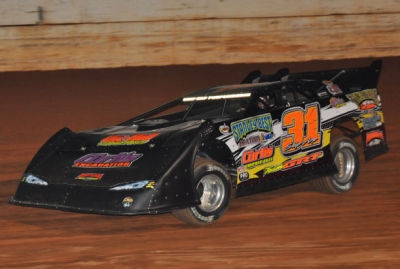 Cook, who won the night's Crate Late Model feature, settled for second with Tommy Kerr of Maryville, Tenn., rallying from a consolation race victory to finish third. Jacob Grizzle of Blairsville, Ga., and Jake Knowles of Tyrone, Ga., rounded out the top five.

Ronnie Johnson of Chattanooga, Tenn., going for his second straight SRRS victory, was heading for the front when a flat right rear tire struck on the 10th lap. He raced back toward the front after a pit stop but spun again on the 36th lap while running sixth; Johnson ended up eighth.

Among cautions slowing the action was a second-lap accident on the frontstretch that almost sent Mark Vineyard on his lid. And fast qualifier Mike Weeks broke a driveshaft that stuck in the racing surfacing, standing straight up.