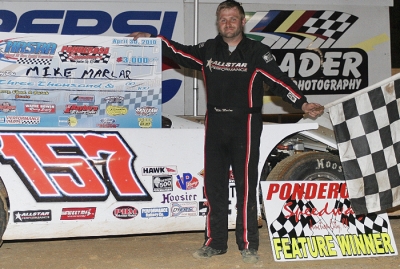 Dustin Neat of Dunnville, Ky., was beginning to pressure Marlar in the race's late stages when a lap-35 caution reset the field, and Marlar cruised the rest of the way. Tenth-starting Victor Lee of Stanford, Ky., was third with Brad Neat in fourth, two spots behind his brother. Fast qualifier Eric Wells of Hazard, Ky., rounded out the top five. | Slideshow

Three cautions slowed the action, the most serious on the second lap when Michael Chilton spun in turn one, collecting Jeff Watson, Bobby Wolter Jr., and Arnie Fields. Dustin Linville was pointing the wrong direction in turn four to draw a lap-35 yellow and the caution flag reappeared for debris on the ensuing restart.