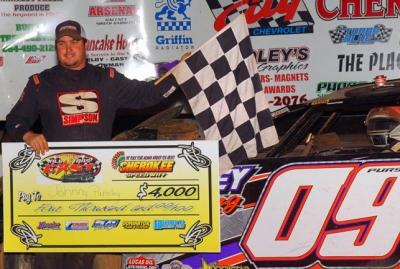 Dillon ended up seventh in the final rundown. Outside front-row starter Dennis "Rambo" Franklin fell out early with a flat tire on the eighth lap.

Notes: Pursley's No. 09 is sponsored by Pursley Grading. ... Racing lasted past midnight after a couple of unexpected delays. Problems with a new timing system delayed time trials until nearly 10 p.m., and the track lights were out about 15 minutes after 13 laps of the feature. ... Ricky Weeks, Furman Parton and Mike Gault were part of an early caution. ... G.R. Smith was running fifth when he spun on the 13th lap. ... Next up for SAS East competitors is the $4,000-to-win Rock Gault Memorial on May 15 at Cherokee.