From series, correspondent and team reports 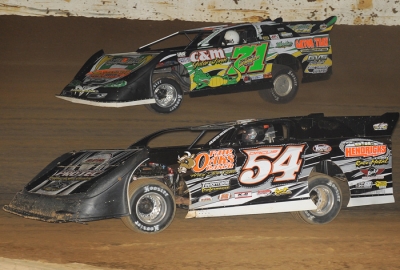 Third-starting Dane Dacus of Lakeland, Tenn., earned a career-high $7,500 on Saturday at the 3/8-mile oval with a victory in front of a large crowd at the westernmost series trip of the season. Dacus, who slipped under front-row starters Wendell Wallace and Chris Wall to take command on the second lap, became the third first-time series winner of the 2010 season. | Video | Slideshow

The polesitting Wall, of Holden, La., made a few high-side bids at the lead but settled for second while seventh-starting Randy Weaver of Crossville, Tenn., ended up third in the King of the Hill 50. First-lap leader Wallace, of Batesville, Ark., was fourth and Skip Arp of Georgetown, Tenn., rounded out the top five in Clayhill's season opener.

Dacus immediately went to the extreme low groove to squeeze under Wall on the second lap and edged away early in the main event.

"I ran second to him a lot of times, so it feels good to actually outrun him," said Dacus, who maneuvered through slower cars to keep Wall at bay. "With a couple of lapped cars, it isn't bad, but when you starting getting into pretty heavy lapped traffic on this deal, it gets pretty tight."

Wall, making his first appearance at Clayhill, made a high-side run on a restart but couldn't stay alongside Dacus.

"Dane's tires fired quicker than us. Hat's off to him, he just had an excellent race car," Wall said. "I thought maybe I could catch him in a vulnerable position there, maybe try to get around him with a lapped car or something. We got to the outside of him once or twice, but couldn't make it stick."

Hall of Famer Scott Bloomquist of Mooresburg, Tenn., started fourth in the main event but faded and dropped out with a 16th-place finish.