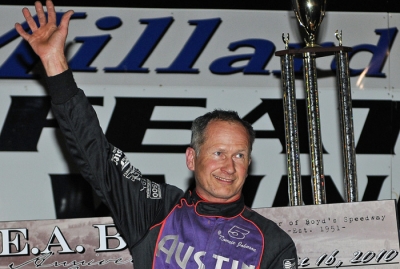 RINGGOLD, Ga. (April 16) — Hall of Fame driver Ronnie Johnson of Chattanooga, Tenn., captured the first-ever Volunteer Racing Series event, earning $3,000 at Boyd's Speedway for a victory in the E.A. Boyd Anniversary Classic. Johnson led all 40 laps and notched his second victory of the season at the track just south of his hometown. | Slideshow | Video

"It means a lot to win here at home," Johnson said in victory lane. "We've got some really good racetracks in this area to race at. I talk to people from all over — we've raced a lot of places — but some of the best racetracks in the country are in this Tri-State area right here."

Johnson stayed in command, building his lead through lapped traffic while Weaver settled for second at the third-mile oval on the Georgia-Tennessee border. Ogle ended up third with Eric Wells of Hazard, Ky., and Vineyard rounding out the top five finishers.

Notes: Johnson drives a MasterSbilt Race Car with a Vinson Racing Engine and sponsorship from Miller Bros. Coal, Simmons Lawn Care, American Billet and Transport One. ... Mike Weeks of Friendsville, Tenn., was fastest on the clock at 14.436 seconds, but he was penalized for appearing late in the qualifying order. ... Drivers failing to make the feature lineup: David Payne, Brian Hickman, Chris Noah, Ray Jarnigan, Denny Slayton and Jason Welshan. ... The next Super Late Model event at Boyd's is a Southern Regional Racing Series event on May 7. ... The first-year Volunteer Racing Series returns to action May 28-29 with a weekend at Boyd's and North Georgia Speedway in nearby Chatsworth.