Ogle rebounds for $3,000 victory at Tazewell 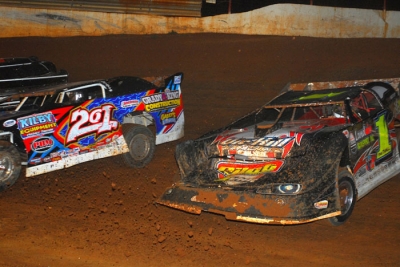 TAZEWELL, Tenn. (April 10) — When Billy Ogle Jr.'s car got turned around in an early scramble at Tazewell Speedway, the Knoxville, Tenn., driver figured he was in trouble. But after watching things develop at the caution-plagued National All Star Racing Association event, Ogle decided to be patient after restarting on the tail. | Video | Slideshow

"When I was in the back, I was just watching everybody and how crazy they were. I said, 'There's plenty of time in this race if I just take my time,' " Ogle recalled.

Indeed, Ogle worked his way back to the front, overtaking Mike Weeks and Tommy Kerr to grab the second spot before the halfway point in the Charles Trammell Memorial 50, and then making an outside pass of Rick Rogers on the 37th lap to take command.

"We had a good car. I got spun out there on lap 10, and I had to go to the tail, but I knew the way everybody was driving, it just seemed like there wasn't going to be a big field of cars finish," Ogle said. "It ended up being right on that. It just seemed like people were taking too many chances. That's how it got me turned around early. Somebody got into the back of me and looped me, but I was able to straighten the front end up and get back going."

Once Ogle got back to second, he measured Rogers as his No. 201 got rolling in the high groove that carried him into the lead and a $3,000 victory.

"I found it before anybody, I believe, and I think that was a big plus in me winning, the top groove in (turns) three and four," Ogle said in victory lane, "Because it was taking rubber and I could really feel it hooking up."

Rogers, also of Knoxville, ended up second with Tommy Kerr of Maryville, Mike Weeks of Friendsville and Mike Marlar of Winfield giving Tennessee a sweep of the top five finishers. David Webb, who led the first 10 laps and later fell from contention when he lost a right-rear wheel while running second, ended up seventh.

Webb, Steve Smith and Rogers battled up front early while several wrecks and spins brought out cautions in a race eventually slowed nine times. Rogers eventually got ahead on the 11th lap with Weeks and Kerr giving chase as Ogle began to recover from his early skirmish with heat winner Vic Hill.

Half the 24-car field was parked by the 17th lap as Ogle was back into the top five. Ogle slide bolding around Kerr and Weeks to take second on the 23rd lap and then set his sights on Rogers.

Notes: Ogle's car is sponsored by Calhoun's Restaurant, Kilby Equipment, Grady and King Construction and Gabby's Alternator. ... Ogle's victory came just a day after the Southern Regional Racing Series penalized him for using a chemically-altered tire the previous weekend at North Georgia Speedway. SRRS officials fined Ogle $1,000, docked him 500 points and will require him to forfeit his earnings at North Georgia. ... Tazewell's season opener was dedicated to the life of Charles Trammell, a decorated and dedicated racer and fan of Tazewell Speedway. Following time trials, his grandson Jason Trammell carried the U.S. flag around the track as Danny Sexton sang the national anthem. ... Christian Rayburn got hard charger honors with his 22nd-to-11th run. ... Jason Welshan won the Limited Late Model feature. ... Next up for NASRA competitors is a $3,000-to-win event at Tri-City Speedway in Granite City, Ill., on April 16.