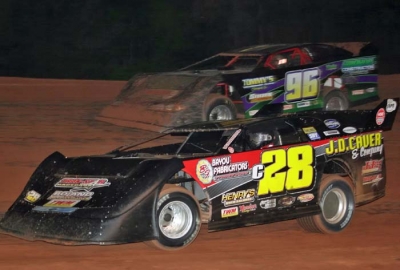 Merchant, who borrowed a rear end from Ray Moore's team after his heat-race altercation, had an exciting duel with Cummings late in the race as the two broke away from the pack with 12 laps remaining in the 40-lapper.

Cummings, of Sibley, La., got alongside Merchant on lap 31, and drove deep into turn one on lap 33 as the frontrunners made contact. Merchant held on, though, and a lap-33 caution set up the race to the finish. Cummings chased Merchant the rest of the way, sticking a nose underneath with two laps remaining but settling for second, just three lengths behind the winner.

Merchant knows he was fortunate to keep Cummings behind him.

"Kyle is just great here at these places that you run right around" infield tire barriers, said Merchant, who fought brake problems part of the race. "If you have to run down around them, then Kyle is the man to beat.

"Luckily we did not have to pass him, because luckily we were ahead of him and all we had to do is hold him off. Kyle is a great competitor, I knew unless I messed up that he wasn't going to rough me up, to do anything stupid, because he is a clean driver and races hard."

Adams got the jump on Merchant at the outset and reached slower cars after just six laps. Amid lapped traffic, Adams bobbled in turn four on the 11th lap as Merchant and Cummings slipped past.

Alex Ashley of Zachary, La., flipped his No. 9 in turn four on the 12th lap to draw the first caution, but he wasn't injured.

Following a lap-15 caution for a spun car, Merchant expanded his lead over Cummings to 1.5 seconds at the midway point while Moore was up to fourth behind Adams. A few laps later, Merchant and Cummings began their late-race duel to the checkers.

Merchant was fortunate to race in the main event at all. While heading toward victory in his heat race, Merchant's car made hard contact with Shawn O'Toole, and he made it to the finish despite his wheel and a portion of the rear end coming out from under his car.

Needing a rear end but with no spare parts on hand, Moore's team loaned him a rear end that, Merchant was surprised to find, fit perfectly.

"There at the start, we let Ronny get ahead us, just mainly feeling the car out because we didn't know if something was about to fall off, especially since we were in a mad dash to put this rear end in," Merchant said. "After we ran four or five laps, I knew we were pretty good and everything felt fine."

Notes: Merchant's Trak-Star Chassis has a Wall 2 Wall Performance Engines and sponsorship from J.D. Caver & Co., J&J Motorsports, Bayou Fabricators and Henry's Auto Salvage. ... The victory was Merchant's third of the last four SUPR series races held at Champion Park Speedway. ... Kyle Cummings has finished no worse than fourth at the last five SUPR events at Champion Park. ... The checkered flag fell on the 36-minute feature at 11:28 p.m.; three cautions slowed the action. ... Thirteen cars finished on the lead lap. ... Robbie Stuart of DeRidder, La., was the hard charger of the race, going from 17th to eighth. ... Another scary flip in heat two, sent Darin Patrick of West Monroe, La., on his roof as his No. 21 car rested atop the track in turn two. Patrick could not climb out immediately, as track safety crew worked to get the car upright. Patrick was uninjured, but done for the night. ... Drivers failing to make the feature: Jim Bryant, Wesley Chanler, Mark McWilliams, Rusty Cummings, Wayman McMillan, Ron Cavanaugh, Bob Ewell, Shawn O'Toole, Joey Couvillion, Bryan Sugg, Darin Patrick, Timothy Culp and Heath Culp. ... Next up for O'Reilly SUPR competitors is an April 24 event at Cowtown Speedway in Kennedale, Texas, the series visit since '98, when Rusty Cummings was victorious.