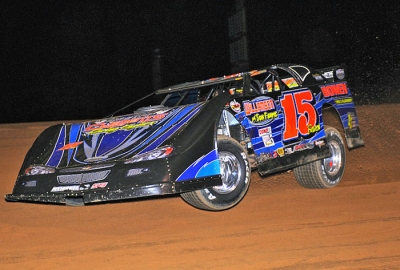 Bowen, whose first career series victory came March 20 at Carolina Speedway near Gastonia, N.C., pocketed $4,000 for his 40-lap victory in the Ed Gibbons Memorial at the 4/10-mile oval. He also moved into the series points lead and plans a full-season run on the tour.

"We set out to run the whole thing and we’re going to stick to it as long as we can afford to," said Bowen, whose victory came in front of dozens of friend and family members. "As long as we’re winning, we might be able to afford to. If you run top five, you can afford to."

Reigning series champion Jeff Smith of Dallas, N.C., was among drivers collected in an early pileup in a caution-plagued race.

Bowen was worried about his car's handling at the outset, thinking it was too loose. But "once it got some heat in the tires, it was good," Bowen said. "I was happy to finish second to Ricky, but if we can get a win, I’ll take that. ... The car was real good. I just needed to run a long time without a caution."

The runner-up said he raced the whole way driving one-handed after mechanical problems struck before the green flag flew.

"On the parade lap down back straightaway, I let out of gas and it came out of gear," Franklin said. "I just had to hold it in gear the whole race."

Notes: Bowen's Rocket Chassis is powered by a Custom Race Engine and sponsored by Williamson & Son Farms and Bowen Tire & Alignment. ... Bowen's car was just three pounds over the legal minimum. .... DQ'd Timmy Blackwell was five pounds shy. ... Carolina Clash competitors break for a month before returning for a May 7-8 weekend at Cleveland County Speedway in Lawndale, N.C., and 311 Fastrak at Madison, N.C.