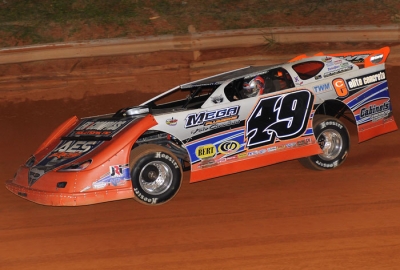 TOCCOA, Ga. (April 10) — Series points leader Jonathan Davenport of Blairsville, Ga., raced to a dominating victory at Toccoa Speedway for his second series victory of the season and fourth of his career. The polesitting Davenport earned $5,000 after leading all 50 laps at the third-mile oval, and added another $1,000 by taking the night's Fastrak-sanctioned Crate Late Model feature. | Video | Slideshow

“Our car was good when we unloaded," Davenport said of his Barry Wright house car. "Barry and Lance had the car nearly perfect for me. We got in a rush running both cars and I was afraid we went too soft on tires (in the Southern All Star event), but it all worked out in the end.

"This place is tight and it can be hard to pass on. We were able to catch the lapped cars just right for the most part. Some of them were a little tougher than others, but it’s a part of racing."

Notes: Davenport’s Barry Wright House Car is powered by a Clements Race Engine and sponsored by Baird Trucking, Elite Concrete, Mega Plumbing of the Carolinas, EnCompass Solutions and Cabinets by Design. ... Davenport is the first repeat series winner of 2010. ... Lee Sutton, Tony Knowles, Royce Bray and Gus Simpson were all involved in a lap-nine caution in turn one. ... Scott Creel and Jimmy Ivester tangled on the backstretch on lap 42; Creel returned after changing a flat tire. ... The checkered flag few at 11:02 p.m. on the 27-minute feature. ... Next up for the Southern All Stars is the first-ever series stop at Clayhill Motorsports Park near Atwood, Tenn. The winning purse is $7,500.