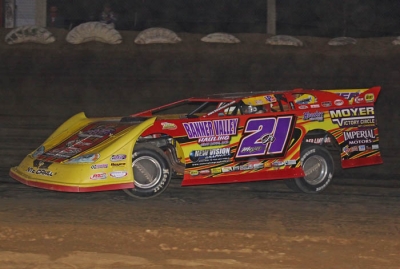 Moyer, 22, earned $2,000 for leading all but the first lap of the 30-lap feature at the quarter-mile oval in central Arkansas. The victory is the third of Moyer's career on the MSRA circuit.

Dacus, who led the first lap, settled for second with teenager Gary Christian of Broken Bow, Okla., in third. Arkansas veterans Jack Sullivan of Greenbrier and Wendell Wallace of Batesville rounded out the top five finishers.

Moyer inched ahead of Dacus on the second lap, fought off the second-running Tennessean amid traffic before the midpoint of the race, then pulled away after lap 17 for the victory.

The race's lone caution appeared on the first lap when Dacus and fellow front-row starter Jon Kirby of Russellville, Ark., made contact between turns one and two. Both spun to trigger a track-blocking pileup that forced a complete restart, but heavy front-end damage prevented Kirby from continuing.