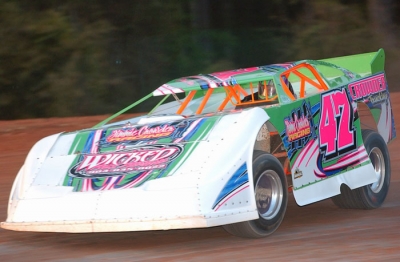 Tallahassee's Ivey led in the late stages of the 50-lapper, but Ocala's Lloyd closed amid traffic and slipped around with just a half-dozen or so laps remaining. It appeared Lloyd would cruise to the checkered flag, but Brandon Cameron's smoking car drew a caution that set up a two-lap dash to the finish. | Slideshow

On the restart, Ivey slipped underneath Lloyd in turns three and four and regained the top spot en route to his second career UDLMCS victory.

"I didn't wanna let lapped traffic decide our fate, so I got up on the wheel and did what I had to do and drove the car really hard at the end," Ivey said. "I sure didn't wanna let the crew down with a second-place finish. We went off into the corner on the restart and my car hooked down there on the bottom. ... I saw his back end start sliding."

Lloyd knew he let one get away.

"Ain't no excuses on that one," Lloyd said. "I drove down into the corner and the car got to sliding a bit. It opened a hole and away he went. He was running good tonight, and I wasn't quite good enough."

Fast qualifier Russell Brown Jr. of Valdosta, Ga., crossed the stripe in third, but he was disqualified for weighing in too light at the scales. That lifted Jeremy Faircloth of Swainsboro, Ga., to third with Chesley Dixon of Swainsboro and Jeff Fortner of Vidalia, Ga., rounding out the top five.

Although he arrived late and missed practice, Faircloth led the opening laps from the outside of the front row. On the race's first restart, Ivey jumped from third to first as the green reappeared, overtaking Faircloth and second-running Darrell Padgett.

Ivey steadily built his lead while Lloyd worked toward the leaders after starting fifth, using double-file restarts to pick off positions. Lloyd and eventual sixth-place finisher Padgett swapped the runner-up spot a couple times on restarts.

Notes: Ivey's Rocket Chassis is sponsored by Crowder Trucking. ... Ivey's previous UDLMCS victory came Sept. 13, 2008, at Golden Isles Speedway in Brunswick, Ga. ... The UDLMCS has split into North and South divisions for 2010, and this event marked the first North race. ... The race was slowed eight times with the most serious incident drawing a red flag midway through the race when Shane Williams of DeLeon Springs, Fla., flipped between turns three and four. He wasn't injured. Johnny Collins and Mike Nasworthy were also caught up in the accident. ... Next up for UDLMCS competitors is a $4,000-to-win North division event on April 17 at East Alabama Motor Speedway in Phenix City.