Roberts outruns Hunter for $5,000 at Lavonia 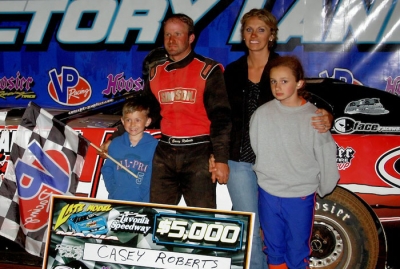 "I knew if we could just ride around and stay with Ethan we should be in good shape later in the race," Roberts said. "I knew we were a little harder on tires than he was and that was really the difference in the end.

"Ethan has got a lot of talent. He has a very bright future in the sport. He was a lot better than we were at both ends of the track until his tires went away. I feel sure he will be racing for a lot more wins in the future."

Roberts captured his fifth career Southern All Star event and first since last August at his hometown Toccoa Speedway.

Notes: Roberts drives a Victory Circle Chassis with a Randy Clary engine and sponsorship from Starrette Trucking and Cushman Paint & Body. ... His previous SAS victory came last August at his hometown Toccoa Speedway. ... At Lavonia, Roberts was the only driver under 16 seconds in time trials. ... Rough track conditions forced track workers to work on the surface throughout the night, and officials opted for single-file restarts in the main event. ... Six cautions slowed the feature. ... Parker Herring won the Southeastern Late Model Sportsman Series feature and Brandon Haley captured the main event for Fastrak Crate Late Models. ... Drivers failing to make the Southern All Stars feature: Gus Simpson, Sean Harrison, Doug Smith, Tim King and Gary Collins. ... Next up for the Southern All Stars is a $5,000-to-win event April 10 at Toccoa (Ga.) Speedway.