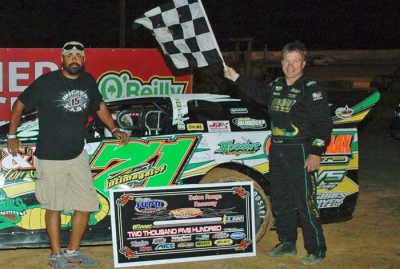 "It is pretty neat to come back to Baton Rouge, one of our hometown tracks," said the 42-year-old Wall, who is following the Lucas Oil Late Model Dirt Series in 2010. "Any time you come near home, it is always nice to get a win in your hometown.

"Running with the national-caliber competition we have this year, certainly is going to force you to step up your program. It has definitely helped us for when we come back home, it has sharpened us and bettered our program when we have been out on the road.

Wall led most the way, but Litton, another former SUPR champ from Alexandria, La., challenged Wall in a classic, lead-swapping duel midway through the race at the quarter-mile oval north of Baton Rouge.

"To be honest with you, we got out front and kind of put it on cruise control," Wall said. "When I saw somebody pull outside of us, I was a little bit surprised, so the driver had to get up on the wheel and get it done after that."

Litton eventually faded to third behind the eighth-starting Moore while Kyle Cummings of Sibley, La., took fourth from David Ashley of nearby Zachary, La., late in the race. The fifth-finishing Ashley was the last car on the lead lap.

At the drop of the green, Wall dipped under polesitter Jeff Chanler of Minden, to lead lap one. After a brief yellow for a spun car, a three-wide battle for third was waged among Doug Begnaud, Litton and Moore, with Litton emerging and tracking down Chanler for second by the sixth lap.

The leading Wall approached lapped traffic on the 10th circuit and began to stretch his lead over Litton to a full second. As traffic thickened, Litton quickly closed the gap, grabbing the lead on lap 16. Wall inched back up to Litton on lap 18 and the two raced side-by-side while trading the point the next 10 circuits.

Wall eventually regained control of the race while Moore took third from Ashley on lap 28 and set his sights on a fading Litton. With Litton falling far behind Wall, Moore took the runner-up spot with two laps to go while Wall cruised to the checkers for his fourth career SUPR victory at Baton Rouge.

Notes: Wall's MasterSbilt Race Car has a Wall 2 Wall Performance Engine and sponsorship from C&M Gator Farm, Gator Trax Boats, X-Treme Graphics, GVS Racing and O.H. Hendricks. ... Wall is SUPR's only repeat winner at Baton Rouge since February 2007; he also won last spring's event at BRR ... The 24-minute feature, slowed by two early yellow flags, wrapped up at 11:26 p.m. ... Preliminaries were marred by Kennith Crowe's outburst in a heat race. The Port Allen, La., driver appeared to spin Ronny Adams intentionally in turn one during a stretch of hard racing, and the accident collected two other cars. Crowe climbed from his new No. 7, ran over the Adams machine and pounded on the car. Authorities led him back to the pit area in handcuffs. ... Adams transferred to the main event, finishing 17th. ... Kevin Sitton of Baytown, Texas, used a start-and-park provisional in Darin Patrick's loaned No. 21. ... Drivers failing to make the feature lineup: Crowe, Joey Couvillion, Dwight Falcon, Darin Patrick, Shawn O'Toole, Jason Polite and Hank Schlindwein. ... SUPR competitors complete the Easter weekend with a Saturday event at Pike County Speedway in Magnolia, Miss.