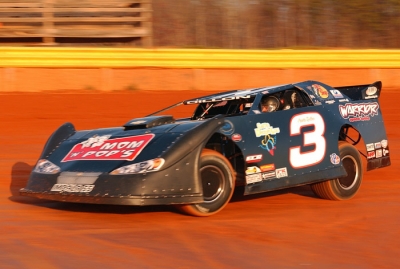 MADISON, N.C. (March 27) — If at first you don't succeed, try, try again. Austin Dillon of Welcome, N.C., followed that maxim on Saturday, rebounding from an afternoon loss with a nighttime victory as he captured his first Carolina Clash Super Late Model Series feature.

The 19-year-old Dillon started outside the front row at 311 Fastrack and led all 40 laps, holding off five-time series champion Ricky Weeks of Rutherfordton, N.C., to pick up $4,000. His victory came after finishing a lap down in 16th in NASCAR's Camping World Truck Series Kroger 250 at Martinsville (Va.) Speedway.

"The car was amazing. I could get through (turns) three and four so good. Me and (team manager) Shane (McDowell) had been talking about what we needed to do after hot laps, and I think we made the right adjustments."

The polesitting Weeks settled for second at the half-mile oval with third-starting Jeff Smith of Dallas, N.C., in third after holding the second spot early. Kentucky transplant Jordan Bland of Concord, N.C., advanced six positions to finish fourth and Chris Ferguson of Mount Holly, N.C., rallied after being part of a lap-11 caution to round out the top five.

Several cautions slowed the action, including five over the first 11 laps. The race's most serious incident came on the 14th lap for a four-car pileup between turns one and two that blocked the track. The red-flagged wreck eliminated Tim Allen while Jay Sessoms, Chris Blackwell and Shawn Beasley were able to continue.

Notes: Dillon's Warrior Race Car is powered by an Earnhardt-Childress Racing engine and sponsored by Mom and Pop's Country Ham. ... His victory came on the birthday of one of his crew members, Ryan Sparks. "I told you I'd get you one," Dillon said in victory lane. ... Dillon becomes the second first-time series winner of 2010, following Dean Bowen's victory the previous Saturday at Carolina Speedway near Gastonia, N.C. ... Bowen pulled out of the race at 311 during a caution in the first half of the race. ... A Billy Thompson-Ross Bailes tangle on a lap-11 restart sent both cars spinning into the inside wall; Bailes dropped out on lap 30. ... David Taylor's 22nd-to-10th run gave him hard charger honors. ... Kenny Compton got the Hard Luck award. ... Among drivers failing to make the main event: Jeff Cooke, G.R. Smith, Gary Mabe and Dan Breuer. ... After a break for Easter weekend, Carolina Clash competitors return to action April 10 for the $4,000-to-win Ed Gibbons Memorial at Fayetteville (N.C.) Motor Speedway.