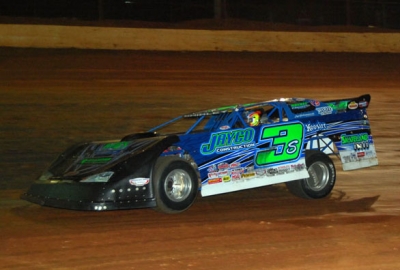 CLARKSVILLE, Tenn. (March 27) — Brian Shirley of Chatham, Ill., was in contention for a victory at Clarksville Speedway in his first outing of the season. He came back and got one two weeks later.

Racing to the front from his fifth starting spot with the help of some attrition, Shirley earned $3,000 at the quarter-mile oval for his first career victory on the Southern Regional Racing Series. He topped polesitter Jeff Walston of Paducah, Ky., while Eric Hickerson of Linden, Tenn., was third, the top finishing SRRS regular. | Slideshow

Brandon King of Decatur, Ala., was fourth and Jacob Grizzle of Blairsville, Ga., rallied from 13th to round out the top five finishers. Daniel Miller of Shelbyville, Tenn., started outside the front row and led the first 36 laps, but engine woes forced him out and he ended up 17th in the third series event of 2010. Josh Putnam of Killen, Ala., was in third when a bent control arm and broken balljoined forced him to the pits on lap 36.