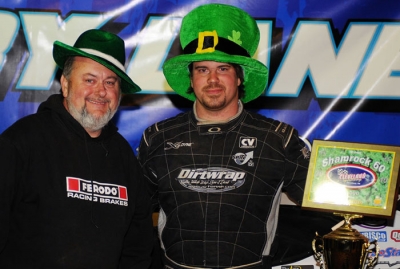 CLEVELAND, Tenn. (March 20) — Encouraging someone to don an enormous green leprachuan hat in front of a crowd isa tough sell in most cases. But when it comes with more green — in the form of a $10,000 winner's purse — it's a little more appealing. | Slideshow

After leading every lap of the Shamrock 60 at Cleveland Speedway, Jonathan Davenport of Blairsville, Ga., put on the headwear in victory lane to celebrate his first Southern All Star Racing Series victory of the season and third of his career.

"Since me and (car builder) Barry (Wright) got together, we haven't done nothing but go forward," said Davenport, who pilots Barry Wright's house car. "He's a great man, he's taught me a lot and his cars are getting better every time we run 'em."

The outside front-row-starting Davenport held off Dale McDowell of Rossville, Ga., for the victory at the 3/8-mile oval, the richest March special at Cleveland since McDowell won the Shamrock in '99. Jimmy Owens of Newport, Tenn., was third followed by polesitter Chris Wall of Holden, La., and Chris Madden of Gray Court, Tenn.

The feature was slowed by a single caution on the 13th lap for fast qualifier Ray Cook of Brasstown, N.C.