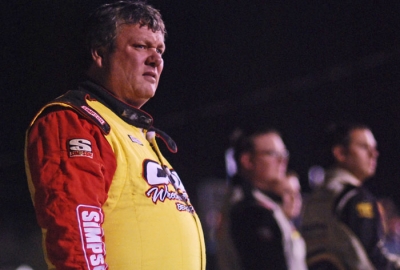 UNION, Ky. (March 20) — In a Spring 50 where two of the fastest cars fell by the wayside, Don O'Neal of Martinsville, Ind., was standing tall at the end of the season-opening event at Florence Speedway.

The ninth-starting O'Neal, who led twice for 19 laps, took over for good when Jason Feger's left-front tire went flat on lap 41 and earned $5,000 for his fourth career Spring 50 triumph and first since 2006. | Postrace notebook | Slideshow

"I believe things fell our way tonight, but we'll take it," O'Neal said in victory lane at the half-mile oval in northern Kentucky. "It's a win, anyway."

O'Neal took the checkered flag a half-straightaway ahead of fellow Indiana driver Greg Johnson, who started 11th in a Gary Engle-owned car and ran in the top five most of the race.

Outside front-row starter Dan Schlieper of Sullivan, Wis., led the first 13 laps but fought a loose-handling car the rest of the way in finishing third while 15th-starting Rod Conley of Wheelersburg, Ohio, picked up five positions the final nine laps to finish fourth.

The fifth-starting Feger, the Bloomington, Ill., driver who got rolling on the high side midway through the race and led laps 32-41, wasn't the only frontrunner to run into trouble.

Polesitter Eric Wells of Hazard, Ky., stalked Schlieper through the race's early stages, took command shortly after a lap-12 restart and was cruising when he blew an engine on lap 21 with an inglorious plume of smoke heading into turn one.

O'Neal inherited the lead from Wells for the lap-21 restart, but Feger came alive after a lap-26 caution for a slowing Wayne Chinn, blowing past O'Neal to lead lap 32.

"When I heard him, it was too late," O'Neal said. "He was already up beside me down the back straightaway. I got up there and and I could follow him, but I wasn't going to be able to pass him unless something happened."

That something happened as Feger, who banged together with Jeep Van Wormer early in the race and damaged the sidewall of his left-front tire, felt the tire going flat during a lap-41 caution period, and the driver running his first-ever race at Florence was dead in the water when he led the field back to green.

"We were just so-so, then after that (lap-26) restart it just took off," Feger said. "I figured out how to get into (turn) three real good, and it just took off. I was just counting 'em down and hoping everything would keep air — and it didn't."

O'Neal ran unchallenged the rest of the way for the victory, but it didn't quite make up for his last-lap loss to Jimmy Mars at Florence in last year's $50,000-to-win North-South 100.

"I can't wait to come back in August and see if we can't redeem ourselves," O'Neal said.

Five cautions slowed the action, none for serious incidents. Frontstretch debris brought out a lap-13 yellow, and the caution appeared again on lap 21 for Wells and a slowing Matt Miller. Another yellow appeared on the lap-21 restart when Mike Marlar's car lost its rear-end cover, and the final yellow appeared for a slowing Justin Rattliff on lap 41.

Notes: O'Neal's MasterSbilt Race Cars house car has a Jay Dickens powerplant and sponsorship from Superior Cleaning Servicesm Jones Core and Scott Clippinger Racing. ... O'Neal previously won the Spring 50 in '99, '02 and '06. ... Eddie Carrier Jr. was the first driver out of the feature when the center of the oil pump broke and he lost an engine. ... A flat tire sent Josh Williams out of the race in the early going. ... Mike Marlar lost a pole position in his heat race when he was charged with for first jumping the start and then brake-checking on the next attempted start; he was dropped to the tail but he rallied to transfer to the main in a new No. 157. ...Among drivers failing to make the feature: Dusty Moore, Dustin Linville, Brandon Thirlby, Jay Morris, Aaron Ricketts, Anthony Adams and Jeff Babcock, who was making his debut for Shane and Jennifer Halcomb's team. ... Besides Babcock's heat race wreck, the Halcombs had a tough night when the transmission on the team's hauler broke several miles from the track. Through racing connections they borrowed another truck to complete the journey.