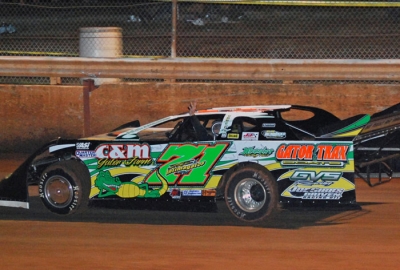 Chris Wall waves from his No. 71. (photobyconnie.com)

COLUMBUS, Miss (March 13) — Rallying from his 11th starting spot, Chris Wall of Holden, La., became the third of three leaders on the 27th lap and took the lead for good with 12 laps remaining to capture the first-ever race on the Promoters Racing Organization Dirt Car Series at Columbus Speedway. | Video | Slideshow

Polesitter Bub McCool of Vicksburg, Miss., and Ronny Lee Hollingsworth of Northport, Ala., swapped the lead over the first 26 laps, but Wall used the low groove to race to the $2,000 victory.

Wall, who headed for Columbus after his originally scheduled event at Cleveland (Tenn.) Speedway rained out, became the first winner on the PRO tour developed by Columbus promoter Johnny Stokes and a trio of partners.

"This is the Bullring. We love to come here, we love the fans here and this old track has been real good to us," Wall said, "so any time we get a chance, then we are going to be here."

Wall pulled away at the end for a 4.5-second victory over 16th-starting Chad Thrash of Meridian, Miss., in the 40-lapper while Anthony Burroughs of Muscle Shoals, Ala., rallied from 13th to finish third. David Breazeale of Four Corners, Miss., and Dane Dacus of Arlington, Tenn., rounded out the top five.

Hollingsworth, who led laps 8-20, faded with mechanical problems after the halfway point and McCool got into the backstretch wall while battling with Wall on lap 29.

Wall struggled in qualifying and finished second in a consolation race to make the feature, where he overcame his sixth-row starting spot.

"The car was phenomenal in the race, but I just didn't get it done in qualifying," Wall said. "My crew never gave up on it, they said, 'Hey that's OK we are still going to go out and get 'em.' Hats off to Johnny Stokes too, it was an excellent racetrack."

Thrash couldn't catch Wall in the final laps, but he had another rally reminiscent of his 21st-to-third run in last year's Magnolia State 100 at Columbus.

"If I could just get to where I can qualify here, I would be a lot better," said Thrash, who kept a close eye on a motor that ran hot the previous week. "I don't know if I had anything for (Wall). I knew when I got to second, he never gained on me and I never gained on him, but I think I could have stayed with him on a restart. I am not going to say that I could have passed him unless he would have messed up."

At the outset, McCool inched ahead of Hollingsworth, but by the time the frontrunners reached lapped traffic, Hollingsworth took the lead on the eight lap and began pulling ahead. Hollingsworth had a five-second margin on the 15th lap after Wall took second from McCool.

The first caution flew at the midway point when Hollingsworth tangled with the lapped car of Matthew Turner, who used an all-aluminum crate engine. Dean Carpenter also climbed the turn-one wall simultaneously and when the green returned, Hollingsworth was still out front, showing some nosepiece damage.

McCool went back ahead on the restart and a three-car battle developed up front with Hollingsworth and Wall. Wall emerged as the leader on lap 27, McCool led the next lap, but Wall was out front for good when McCool smacked the backstretch wall exiting turn two on lap 29, drawing a yellow. McCool retired and Hollingsworth inherited second, but Hollingsworth faded with mechanical problems the rest of the way.

With Wall in total control, Burroughs and Thrash battled for second in the final laps with Thrash coming out on top to clinch American Race Tires Hard Charger honors.

Notes: Wall's MasterSbilt Race Car is powered by Wall 2 Wall Performance Engines is sponsored by Gator Trax Boats, GVS Racing, C&M Gator Farm and X-Treme Graphics. ... Wall is following the Lucas Oil Late Model Dirt Series in 2010 and looks forward to the July 10 visit to Columbus for a $20,000-to-win event. Winning that event "would be a dream come true," Wall said. "We certainly looking forward to hopefully getting a good points finish and a top five at the Lucas deal. That is kind of what led me here tonight is the upcoming points race." ... The race appeared to be in jeopardy when a 30-foot section of the frontstretch wall collapsed on Thursday afternoon, taking down the catchfence with it after heavy rain. Johnny Stokes and track workers made repairs in time for Friday's practice. ... Saturday's checkered flag waved on the 20-minute feature at 10:21 p.m. .... Drivers not making feature included, Brian Rickman, Leon Henderson, Jay Burchfield, Clay Fisher, Hunter Carroll, Joey Baroni, Jason Brock, Chad Wrinkles, Bobby Jordan, Mark Dodson, Trent Letson, Jason Milam, Chase Washington and Jeremy Glasgow. ... Glasgow, of Caledonia, Miss., slammed the turn-two wall in hot laps after his steering broke. He wasn't injured but scratched for the rest of the night. ... Justin McCree of Cuba, Ala., collected $1,000 for his NeSmith Crate Late Model feature victory, as he outdueled veteran Ronnie Johnson and Eric Cooley. ... Next up for the PRO Dirt Car Series is a March 20 event at North Alabama Speedway near Tuscumbia, Ala.