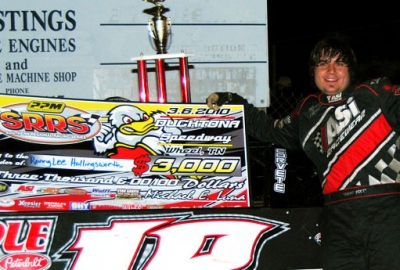 Anthony Burroughs of Muscle Shoals, Ala., was second at the quarter-mile oval in Middle Tennessee while while home-state drivers Daniel Miller of Shelbyville, Ronnie Johnson of Chattanooga and Eric Hickerson of Linden rounded out the top five. Two cautions slowed the action, the second on lap 34 when the suspension on the car of David Seibers broke on the backstretch, littering the track with debris and puncturing the oilpan on the Chad Winkles car.

Notes: Hollingswroth is sponsored by Waddle Trucking and Kelley Electrical Contractions. ... His previous series victory came July 20, 2007, at West Tennessee Motor Speedway in Bargerton, Tenn. ... Josh Putnam of Florence, Ala., earned hard charger honors with his 17th-to-ninth run. ... Next up for SRRS competitors is a $3,000-to-win event at Clarksville (Tenn.) Speedway on March 27.