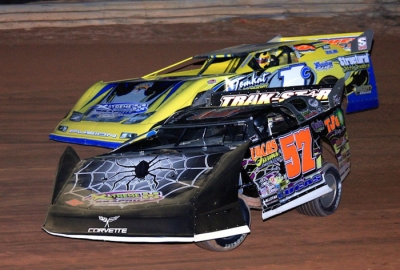 The polesitting Lucas cruised to a 2.5-second victory over David Ashley of Zachary, La., at an event that drew 26 Super Late Model drivers from six states.

(Chassis builder and racer) Mike Boland had told me before the race started to just keep it on the bottom regardless of what happens. That is all I concentrated on, that's all I did and it worked evidently," Lucas said. "I'll be honest with you, I didn't know where nobody was at. I was just watching the laps counting down and trying to keep it on the bottom."

Temperatures dipped below 40 near feature time for the Frostbite 50, but no one was hotter than Lucas, who managed to keep lapped traffic between him and the rest of the field throughout the late stages of the race.

Eleventh-starting Wendell Wallace of Batesville, Ark., nursed his car to a third-place finish, as the runner-up's son, Alex Ashley, rallied from his 21st starting spot to finish fourth. Shannon Lee of Lumberton, Miss., climbed 10 spots from his 15th starting position to round out the top five.

At the outset, Lucas and fellow front-row starter David Breazeale of Four Corners, Miss., battled with Breazeale narrowly leading the first lap before Lucas took command. After a lap-three caution, the frontrunners were quickly into lapped traffic by the eighth.

A lap-21 yellow appeared for a tangle between Scott Creel and Alex Ashley, and Lucas dodged a bullet on the restart when Breazeale made contact and the leader spun in turn two. Three other drivers were caught up in the scramble, but officials restored Lucas to the lead and sent Breazeale to the tail.

Back out front, Lucas had a two-second margin at the halfway point of the 50-lapper, and was in total control when Steve Bryan's lap-38 spin bunched the field. Wallace took second from David Ashley moments before, but Ashley was put back in second for the restart.

Lucas maintained control the rest of the way for the victory.

Notes: Lucas drives a Trak-Star chassis sponsored by TJ's BP, Chubeck LLC, Lucas Farms and Allstar Performance. ... Lucas has three career MSCC victories; his previous win came June 13, 2009, at Southern Raceway in Milton, Fla. ... Neil Baggett of Shannon, Miss., lost a left-rear wheel on a lap-21 restart. ... Drivers failing to make the feature included Kevin Kennedy, Todd Jones, Eric Neal and Nicholas Curole. ... The 49-minute feature, slowed by six cautions, ended at 10:26 p.m. ... Sixteen-year old Joseph Joiner of Milton, Fla., was the fastest qualifier on time at 14.982, but he was light at the scales, handing fast-time honors to Lucas. ... Next up for MSCC competitors is a $2,500-to-win event March 27 at Whynot Motorsports Park near Meridian, Miss.