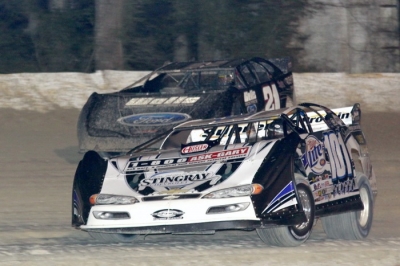 Nosbisch, who led the first 31 laps and crossed the finish line second, inherited his fourth career UDLMCS victory after his engine passed muster in the wee hours of the morning following Friday night's race. Nosbisch earned $3,000 in the first event since UDLMCS competitors split between North and South divisions.

Dillon Wood of New Smyrna Beach, Fla., who rallied from the tail after a lap-six pit stop, was elevated to second place with Brandon Cameron of Jacksonville, Fla., in third. Tyler Ivey of Tallahassee, Fla., who ran as high as third and spun midway through the race, rallied back to fourth and Brandon Dewitt of Morven, Ga., who ran second early, rounded out the top five. Reigning UDLMCS champion Johnny Collins of Jacksonville was seventh.

Among cautions were a sixth-lap yellow for a Jeff Mathews-Philip Cobb tangle and a lap-19 melee in turn one involving five cars which ended the night for Mathews and Darrell Padgett.

Notes: Nosbisch drives a Miller Lite-sponsored Rocket Chassis. ... Dillon Wood transferred to the feature through a consolation race after problems kept him from competing in his heat race. ... Fans and racers donated more than $260 for Jack Smith, founder and operator of Karnac.com and Real Racin' USA. Smith was recently diagnosed with cancer and has been undergoing surgery. ... Next up for UDLMCS South competitors is a $3,000-to-win event at Hendry County Motorsports Park in Clewiston, Fla., on March 13.