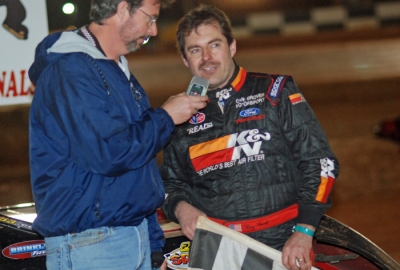 GLENCOE, Ala. (Feb. 28) — Following Sunday night's victory lane ceremonies in the infield at Green Valley Speedway, winner Ray Cook and runner-up Chris Wall enjoyed an animated conversation about their battle for the lead throughout the second half of the 75-lap Bama Bash. And they had plenty to talk about after the dazzling two-car showdown that left the other 26 starters as footnotes in the Southern Regional Racing Series season opener. | Postrace notebook | Preliminaries | Preliminary notebook | Slideshow

The polesitting Cook, of Brasstown, N.C., turned back repeated challenges from Wall, the alligator farmer from Holden, La., for a $10,000 SRRS victory, his second consecutive triumph in the late February special event at the 3/8-mile oval.

The higher-running Cook was able to edge the lower-running Wall in a tight battle of MasterSbilt Race Cars after the sixth-starting Wall lost ground in lapped traffic over a three-lap stretch in the race's late stages.

"We got real racy in lapped traffic," said the 38-year-old Cook, who officially led every lap despite falling behind everywhere but the flagstand several times. "I think he passed me a couple of times, and I was able to get back by him. Then I just started trying to slide (past lapped cars) and hope they were nice enough to let us go through."

Wall, who got up to second by lap 12 and was in striking distance most of the second half of the race, left Green Valley thinking the fastest car didn't win.

"We actually passed him I think for about two laps there battling through lapped traffic," Wall said. "But it never seemed like I could be at the right place at the right time. I liked the bottom, and I think the lapped cars were moving to the bottom thinking we were coming on the top. It was a helluva battle."

With 25 laps remaining, Wall was on the verge of taking command, leading most of lap 51 before Cook's dependable momentum exiting turn four carried him back into the lead. Wall hounded Cook the next seven laps, but when they surrounded the slower car of Tim Lance exiting turn two on lap 58, Cook's high line carried him past Lance while Wall had to check up exiting turn four.

Two laps later, Casey Roberts was plotting his departure from the race and abruptly slowed in front of Wall on the backstretch, giving Cook breathing room he needed the final 15 laps.

"One time I chose to go low and a lapped car was just going to go to the infield to get out of the way and just shut it down right in front of me — he didn't know where I was at," Wall said. "It let Ray get about 20 cars out on me, and it was just everything I could do to just get back to him as we took the checkers there."

Wall briefly pulled alongside Cook between turns three and four on the final lap, but Cook again blasted out of turn four with plenty of room to spare in taking the checkered flag and his ninth career SRRS victory, which ties him with Byron Michael for the all-time lead on the 5-year-old tour.

Randy Weaver of Crossville, Tenn., who started 13th, tried in vain with 15th-starting Ronnie Johnson of Chattanooga, Tenn., to make it a four-car race up front, but they never quite got there in finishing third and fourth. Bub McCool of Vicksburg, Miss., was steady in finishing fifth on a chilly Alabama evening.

Two home-state drivers were in contention through the first half of the race, but weren't around at the finish. Tim Busha dropped out on lap 32 while running fourth, and outside front-row starter Stacy Holmes of Munford, Ala., ran third most of the race but pulled pitside on lap 53, giving up the spot to Weaver.

Cook knew that Wall was a top contender after clocking him during Thursday and Friday practices, but electrical problems during Saturday's prelims stunted Wall, and Cook's victory in Saturday night's first heat put him on the pole for the main event. Cook led by a full straightaway after 25 laps, but Wall cut into the lead and stayed with him after lap 32 and 38 cautions as Cook's failing front tires hampered his steering.

"We could roll through (turns) three and four real good around that top, but I'd lose drive off (turns) one and two, and that's where he'd make up his ground," said Cook, who struggled in the low groove. "I really don't think I was going low enough. I think I was driving in so hard I was just missing the bottom. But I was afraid if I backed the corner up and went down there, somebody would drive around me on the top. I was just doing all I could do."

Wall realized Cook was vulnerable if he was forced to leave his high groove.

"One of the good things about running second is I could see where his car was good and where it was weak. I knew if I could get to him, he couldn't run the bottom," he said.

But Wall knew his fate was sealed with his struggles with lapped cars between laps 58-60.

"I had to drive the wheels off of it. We just got back to him coming to the checkered flag. I think even Ray will tell you we left here with the fastest car, but he got the paycheck," Wall said. "It was a really fun race. Hey, I can't think of a nicer guy. If I had to be beaten by somebody, Ray is just a class act."