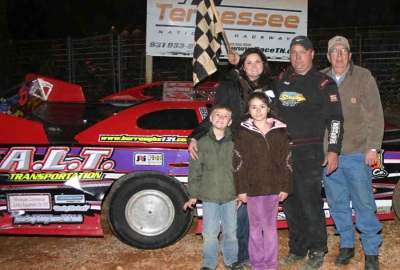 HOHENWALD, Tenn. (Feb. 20) — Anthony Burroughs of Muscle Shoals, Ala., led all 40 laps at Tennessee National Raceway on Saturday for an unsanctioned victory worth $3,000 in the track's inaugural Icebreaker.

The polesitting Burroughs outran fellow front-row starter Eric Hickerson of Lindon, Tenn., for the victory in the afternoon affair at the quarter-mile Tennessee oval.

"It was definitely one-grooved right around the bottom," Burroughs said in victory lane, "but when I saw Eric was behind me in second, I kind of calmed down a little bit because I knew he would drive me clean."

Michael Walker of Franklin, Tenn., was third followed by Billy Moyer Jr. of Batesville, Ark., and Dane Dacus of Arlington, Tenn. The race was slowed by four cautions, the most serious for a first-lap scramble between turns one and two that involved nearly half the field.

Burroughs, who had 10 victories overall in 2009, was glad to break through in 2010 in just his second start of the season. "It's going to be big things this year," Burroughs predicted.

Notes: Burroughs drives a Ronnie Stuckey-built MasterSbilt Race Car with a Wall 2 Wall engine and sponsorship from ALT Transportation, Wholesale Laundry Equipment and ABC Cash Register. ... Tommy Gifford won the Limited Late Model feature while Ken Schrader took the modified main event. ... Tony Morris used No. 17 instead of his customary No. M31 in honoring Tennessee racer Danny Sandrell, who died on Feb. 15 at age 56. ... Tennessee National Raceway returns to action April 3 with a $2,000-to-win Super Late Model event. Later in the spring the track hosts its richest race of the season, an unsanctioned Super Late Model event on May 14-15 paying $10,000 to the winner.