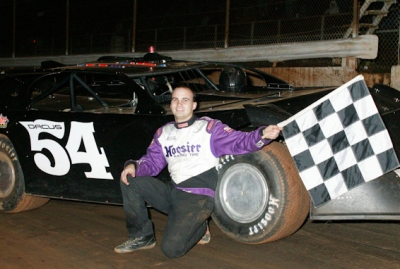 COLUMBUS, Miss. (Jan. 23) — Just a few weeks ago, Dane Dacus of Lakeland, Tenn., was in "winter mode" with his racing program, the suspension out from underneath his race car and no body on the car at all.

That's when racing buddy Dewaine Hottinger of Russellville, Ark., called Dacus and encouraged him to head to Columbus Speedway for the 10th annual Winter Classic. So Dacus and crew members scrambled the past week while burning the midnight oil in the racing shop, getting his 3-year-old GRT Race Car ready. Turns out it was worth the trouble. | Thomas wins Crate feature

Leading most of the way on Saturday, Dacus earned $3,000 in the unsanctioned annual special at the third-mile Columbus oval to outrun Anthony Burroughs of Muscle Shoals, Ala. The high-running Dacus started outside the front row and was in command midway through the 40-lapper, but he slipped back to third as he tried to maneuver lapped traffic and discovered his No. 54 wasn't very good in the low groove.

"I think the biggest deal was the lapped cars were running all over the place," Dacus said in a phone interview while heading back to his Memphis-area home. "I think I got too comfortable and got too cautious when we got into lapped traffic."

Dacus eventually wandered back up to the high groove, regaining positions from Matthew Turner of Dawsonville, Ga., and Burroughs after a few laps to regain command in the late stages of the 24-car event.

"We just stuck it out and ended up panning out for us," Dacus said, pleased to get 2010 off to a solid start. "I'm glad. We've still got a few kinks to work out in our program, but i'm pretty happy with it."

Burroughs settled for second with Turner third in a race where drivers from six different states finished among the top seven spots. Jake Knowles of Tyrone, Ga., was fourth and Neil Baggett of Shannon, Miss., was the top-finishing home-state driver. Tim Lance of Brimfield, Ill., and Kyle Cummings of Minden, La., were sixth and seventh.