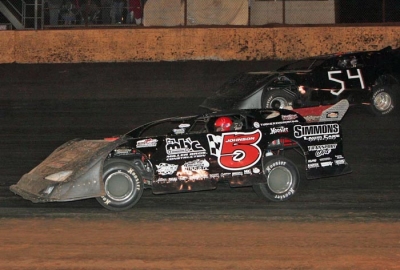 Johnson, who also won the night’s NeSmith Chevrolet Series-sanctioned Crate Late Model feature, earned $3,000 for his Super Late Model victory and more than $6,000 in weekend earnings overall at the high-banked third-mile oval near the Mississippi-Alabama border.

In Saturday’s Super Late Model finale, Dacus was in command early in an all-black No. 54 with duct-taped numbers on the sides. He stayed out front while Johnson battled early with Chris Wall of Holden, La., the $2,000 winner of Friday’s preliminary feature.

Johnson had wrestled the second spot from Wall before the Louisiana driver pulled off with a smoking machine, and then he took up the chase of Dacus. While Dacus ran the high groove, Johnson chipped away at the lower groove, eventually nipping Dacus at the line. Dacus tried to answer with a low-groove move of his own in turns three and four, but Johnson edged away the rest of the race, winning by nearly a half-straightaway.

Dacus settled for second in Saturday’s unsanctioned affair while Jim McDuffie of Meridian, Miss., was third. Hometown driver Brian Rickman was fourth and Chris Ragan of Ramer, Tenn., rounded out the top five.

In Friday’s feature, Wall raced to victory over Riley Hickman of Ooltewah, Tenn., with Bub McCool of Vicksburg, Miss., in third. McDuffie and Ragan rounded out the top five.

Notes: Johnson’s No. 5 is sponsored by Miller Bros. Coal. ... Chad Thrash was running among the leaders early in Saturday’s feature before getting banged around in turn four. ... Rodney Wing of Meridian, Miss., won Saturday’s Late Model Stock feature while Mark Sartain of Corinth, Miss., won Friday’s event in that division.