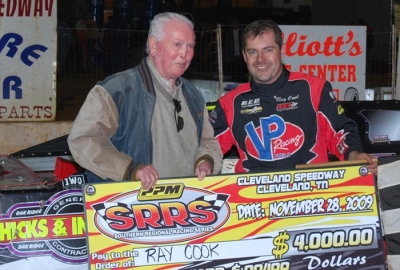 CLEVELAND, Tenn. (Nov. 28) — Concluding the winningest season of his Late Model career, polesitter Ray Cook of Brasstown, N.C., earned $4,000 Saturday at Cleveland Speedway for capturing the 20th annual Grant Adcox Memorial. Cook took the lead when Skip Arp of Georgetown, Tenn., dropped out on the ninth lap and led the rest of the 40-lapper, the season finale on the Southern Regional Racing Series. | Slideshow

“This is really great,” said Cook, whose first 2009 victory came the first weekend in January at Talladega (Ala.) Short Track’s Ice Bowl. "Winning the first and last race of the season. It’s even better since both my car owners are here tonight. We won one of these Grant Adcox races some years back and it’s real special.”

Randy Weaver of Crossville, Tenn., finished second after surviving a mid-race tangle with hometown driver John Owenby. Riley Hickman of Ooltewah, Tenn., was third with Mike Weeks of Friendsville, Tenn., and Rick Hixson of Soddy Daisy, Tenn., rounding out the top five. Jay Brinkley of Raus, Tenn., who had wrapped up the SRRS championship in the previous series race, finished sixth.

Arp was the first drive out of the race but still collected a $1,000 from Car Smart Auto Sales for the best overall finishes among three November specials at the third-mile oval.

Notes: Cook’s MasterSbilt Race Car has a Race Engine Design powerplant and is sponsored by Hicks & Ingle Co. and A+ Moving and Storage. ... Cook’s fast qualifying time came quickly as he was the first of 40 qualifiers. ... The event drew teams from five states. ... Mike Hill of Rockwood, Tenn., was the fourth fastest qualifier overall but lost his qualifying time when SRRS officials ruled he used illegal tires. ... Among the cautions in the feature were for a Lamar Scoggins-Jake Knowles tangle in turn three. ... The final yellow appear for an incident involving Tommy Bailey, Steve Smith and Brian Smith (no relation) in turn two with four laps remaining.