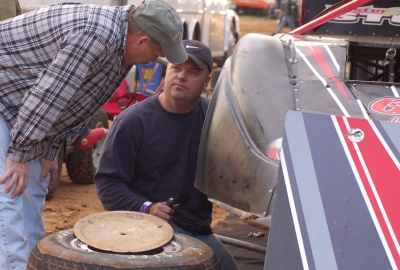 TUSCUMBIA, Ala. (Nov. 21) — Fittingly, the race for the Bama Super Series championship came down to the last race of the season. With the only two drivers able to claim the title racing for a win on the track, Anthony Burroughs won the battle; Chris Ragan won the war.

Burroughs, of Athens, Ala., won the finale on the 10-race Long Lewis Ford Bama Super Series at North Alabama Speedway on Saturday night, tying Ragan for his third series victory of the season.

Burroughs, the only person within striking distance of series leader Ragan heading into the final points race, did all he could in his effort to leapfrog the Ramer, Tenn., driver in the final standings. Burroughs set quick time among the 26 drivers on hand for the $2,500-to-win finale and won the race, but he couldn’t put quite enough distance between himself and Ragan to overcome a 60-point deficit in the standings.

“We went into it knowing that we had missed some opportunities earlier in the season,” said Burroughs. “We had mechanical issues the second race of the season and they didn’t have provisionals, so didn’t even make that race.

With Burroughs winning the feature, Ragan, meanwhile, did exactly what he needed to do to assure himself of his first-ever touring title, albeit a mini-tour at two of his favorite tracks — Moulton (Ala.) Speedway and North Alabama. While finishing second, Ragan stayed close enough to Burroughs to claim the series championship by a comfortable 55 points.

“(Chris) is a good racer and I knew he’d have to have a little trouble for us to win (the championship),” added Burroughs. “This is kind of my home track, too, so I felt pretty comfortable as well. We weren’t really that good in the second practice session, but we came in and made some changes and the car was real good.”