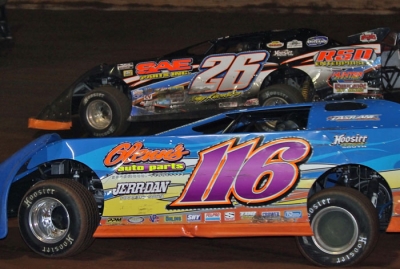 Randy Weaver (116) wraps up his title at Cleveland. (Gary Laster)

CLEVELAND, Tenn. (Nov. 21) — Capping his season with his 11th overall victory, Chris Madden of Gaffney, S.C., dominated the 21st annual Gobbler at Cleveland Speedway for a $5,000 payday. The polesitting Madden notched his fourth O’Reilly Southern All Star Series victory of the season and 38th of his career.

In the battle for the O’Reilly SAS title, Randy Weaver of Crossville, Tenn., took his first crown with a seventh-place finish in the finale, outpointing Ronny Lee Hollingsworth of Northport, Ala., who led the points much of the season.

Rick Rogers of Knoxville, Tenn., started outside the front row and led the first six laps, but Madden took over on the seventh lap and built more than a half-track margin on runner-up Skip Arp of Georgetown, Tenn., before a caution waved with just two laps remaining.

Madden finished out his victory in the two-lap shootout with Arp and Clint Smith of Senoia, Ga., chasing him to the checkers. Rogers finished fourth and Hollingsworth fifth at Cleveland’s traditional event that precedes Thanksgiving weekend.

The winner of the previous two Gobblers, Shane Clanton of Locust Grove, Ga., never got a chance to make it three in a row. He was knocked out after first-lap contact with Smith and Jonathan Davenport.

Notes: Madden’s Bloomquist Race Car has a Cornett powerplant and sponsorship from Century Plastics, Xtreme Customs & Cycles and Hamrick’s of Gaffney. ... Frank Heckenast Jr. finished sixth in a Rick Rogers backup car. ... Todd Morrow wrapped up the O’Reilly SAS Rookie of the Year title despite suffering terminal mechanical problems with his car after qualifying; he borrowed Rick Hixson’s car and started the feature with a provisional. ... Cleveland wraps up its season Nov. 28 with the $4,000-to-win Grant Adcox Memorial, a Southern Regional Racing Series event.

Correction: Fixes that Clanton was going for third straight victory.