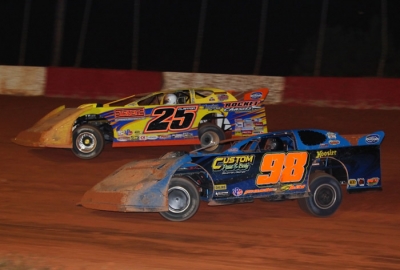 The ninth-starting Barrow's No. 98, equipped with a Limited Late Model powerplant, came out on top in a late-race battle with early leader John Henderson of Aiken, S.C., 15th-starting Ray Cook of Brasstown, N.C., and fellow fifth-row starter Shane Clanton of Locust Grove, Ga., in a race featuring six different leaders.

Fifth-starting Tony Knowles of Tyrone, Ga., took the lead from the third-starting Henderson early in the race, but a flat right-rear tire dropped Knowles from contention midway through the race, handing the lead to Clanton.

But Clanton had his hands full with Henderson, Barrow and Cook, and Barrow got the edge at the finish for his first victory on the 26-year-old tour. Henderson finished second followed by Cook, Clanton and Knowles.

Polesitter Casey Roberts of Toccoa, Ga., the fastest among 32 entries, was towed off the track in the early laps after a tangle with Henderson, who restart out front.

Notes: Barrow is the third first-time O'Reilly SAS winner of 2009; the others are Tim Busha of Boaz, Ala., and Chris Wall of Holden, La. ... Super Late Model cars carried a "Get well soon" decal for Spartanburg, S.C., driver Jeff Cooke, who suffered facial bone fractures in a racing accident the previous week at the Dirt Track at Lowe's Motor Speedway. ... Among drivers failing to make the feature: Jordy Nipper, Jason Fitzgerald, Michael Akeson, Craig Scott, Brad Comer and track champ Monk Gulledge, who scratched after hot laps. ... Todd Morrow broke an axle in hot laps and ended up taking a provisional starting spot. ... After a night off (an event at Fayetteville, N.C., was cancelled), the series heads to Cherokee Speedway in Gaffney, S.C., for the $10,000-to-win Blue-Gray 100.