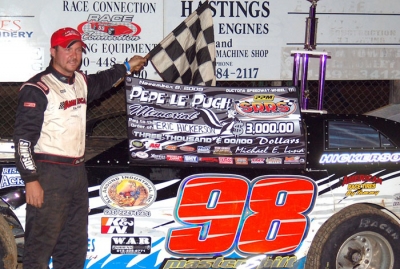 WHEEL, Tenn. (Nov. 7) — On Friday night, Eric Hickerson had a bucket of lemons. By Saturday, he was knee-deep in lemonade.

Hickerson made it into the Nov. 6 Southern Regional Racing Series-sanctioned event at Duck River Speedway by the skin of his teeth. After a subpar qualifying effort resulted in Hickerson finishing in the fourth and final transfer spot in his heat, the Linden, Tenn., driver decided to experiment a bit with the setup on his MasterSbilt Race Car. The car was relatively good and he rallied to an eighth-place finish in the feature, the first of back-to-back SRRS features in a two-day span at Duck River. | SRRS notebook

Less than 24 hours later at the same track, Hickerson reaped the rewards of that glorified test session by collecting the biggest victory of his career. He held off Athens, Ala., driver Anthony Burroughs and Raus, Tenn.’s, Jay Brinkley for the $3,000 win. Daniel Miller, of Shelbyville, Tenn., and Corey Posey, of Petersburg, Tenn., completed the top five.

A day after barely making Friday’s main event, Hickerson started from the pole of the SRRS-sanctioned Pepe Le Pugh Memorial and led all 40 laps. The victory, his fifth Super Late Model win of the season, tops his previous best of $2,000, which came while driving a modified.

“We tried some different stuff last night in the feature because we were starting so far back. It worked last night and that got me going,” Hickerson said. “We just went from there. I kept my head on and I stayed in the bottom.

“It rubbered up down there and I think that it maybe threw some people for a loop. I didn’t think you’d see a lot of passing after it rubbered up on the bottom. The first 10 laps would have been the time to do it. That’s hard to overcome, and I was in the catbird’s seat. Fortunately I just didn’t make any mistakes.”

Opening-night winner Randy Weaver, of Crossville, Tenn., started third and hounded Hickerson in the early laps. Weaver, who was still second after a lap-nine caution, begin trying the outside line but couldn’t gain ground. In fact, the winningest driver on the SRRS tour this season began to slowly lose ground — first to the race leader, and then to the rest of the field. Weaver’s freefall didn’t stop until lap 28, when he pulled to the top of turn four and parked his car. By then, he’d already slipped outside the top 10.

Back at the front, Burroughs still trekked the leader, while Miller and Posey marched through the field. Each time a car would slip out of the preferred groove, the duo inched closer to the front. They made their way into the top five by lap 25.

But with series points leader Brinkley comfortably racing with the knowledge that he’d all but sewn up the 2009 SRRS crown, Miller, who started 10th, and Posey, who started 11th, never made it any higher.

Notes: Hickerson’s MasterSbilt is sponsored by All Around Underground Directional Drilling. ...The race was slowed by six cautions and had no major wrecks. ...The track was noticeably smoother than the night before. ... David Gentry was running seventh when a flat left rear tire with seven laps remaining sidelined him. ... The fourth caution waved when 12th running Brandon Kinzer stopped in the track in turn four on lap 25. Weaver brought out the fifth caution three laps later when he did the same thing. ... Thanks to moving the start time up two hours, the feature was over by 9 p.m. ... While the event’s name — the Pepe Le Pugh Memorial — may seem in jest, it’s actually in honor of a skunk that met its demise at the track a few years back.