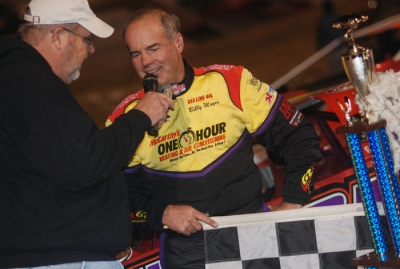 COLUMBUS, Miss. (Nov. 7) — In Billy Moyer's hundreds of victories, he's been able to cruise in plenty of them. But there wasn't any cruising in Saturday's sixth annual Southern Belle Cotton Pickin' 100 at Magnolia Motor Speedway as he found himself in a race-long duel with fellow front-row starter Chris Wall. | Postrace notebook | Prelims

Wall led 54 of 100 laps, but Moyer came out on top at the end to secure the $15,000 winner's purse and his third victory in six years of the richest race at the 3/8-mile oval west of Columbus.

"That was a tough 100 laps right there. Sometimes you can ride for a while, but there wasn't much riding out there tonight," said the polesitting Moyer, a Hall of Fame racer from Batesville, Ark. "When he was in front of me there, he was running good. I knew I couldn't stub my toe anywhere."

Wall, who led laps 5-58, nearly fell out of touch with Moyer a few times but mounted a final charge that fell just a few lengths short in the unsanctioned Dirt Late Model special that drew 60 entries.

"We were there coming back to the checkers," said Wall, the Holden, La., driver who was hoping for his first Cotton Pickin' 100 triumph. "Deja vu from earlier this year (when) we ran the Lucas (Oil Series) race and got going late and ran right to him and needed a couple of more laps. I feel confident that with another couple of laps ... but it's a 100-lap race, so what do you say? We ran second."

Ronny Lee Hollingsworth of Northport, Ala., finished third to duplicate the top three in last year's event while Bill Frye of Greenbrier, Ark., rallied from 11th to finish fourth. Neil Baggett of Shannon, Miss., started seventh but faded before rallying back to finish fifth in a race where nine drivers finished on the lead lap and 14 of 24 starters were running at the finish.

Moyer, who led the first four laps and regained the lead from Wall with an outside-groove frontstretch pass on lap 59, was the only driver among the top five using the standard Super Late Model body rules. Many Southern tracks allow drivers using a spec-engine package that grants them a 12-inch rear spoiler, 4 inches taller than normal, and Moyer has been among vocal critics that the downforce created is an unfair advantage.

Moyer himself used a borrowed spec engine to win last year's Cotton Pickin' 100, and he was having second thoughts about this year's decision to stick with his regular open-competition powerplant throughout the weekend.

"I could've used that same motor again here, and I just elected not to. Once I got here I was kicking myself in the butt," he said. "We thought about switching yesterday, or even today, putting one in.

"You've just gotta pretty tall order when you come down here and try to outrun them blades."

Moyer's personally-tweaked Victory Circle Chassis was up to the task on a track that polished up through the late stages, causing the handling on most cars to tighten up.

"The track there at the end, when it completely kept getting slicker and slicker and slicker, I just feel like that's where our car is the best," Moyer said. "Those (spec-engine) guys, their front wheels don't work as well as mine. My car's too tight. When I'm out there feeling that, I know they're too tight."

Wall indeed fought tight conditions during stretches of the race. He slipped away to build a half-straightaway lead by lap 43 after Moyer and Bub McCool of Vicksburg, Miss., had problems with a pack of traffic 10 laps earlier. But after a lap-56 caution, Moyer used the outside groove to overtake him at the flagstand three laps after the restart.

"I think he was actually just a little better than us at that stage of the race," Wall said. "I kind of found a line there at the end. We actually scraped the wall a little bit there and bent the spoiler. We had been too tight, and it actually freed us up a little bit. It freed up my entry, and we actually got better after we hit the wall. But I'd lost to much ground just trying to get back to him."

The third-starting Hollingsworth actually took the lead from Moyer on the second lap — the move was erased by a caution — but during most of the race, he couldn't keep up with the top two cars.

"You can't complain about a third-place run there," said Hollingsworth, who won $15,000 himself two weeks earlier at Whynot (Miss.) Motorsports Park. "They said we kind of drove away from the rest of the field there, so I'm pretty excited with it. We're just going to go home and work on the front end a little bit and see if we can't get this thing to steer a little bit better."

Notes: Moyer's Victory Circle Chassis is sponsored by Banner Valley Hauling, J&J Steel and Minx Show Palace. ... Moyer's previous Cotton Pickin' 100 victories came in 2004 and '08. ... Sixth-place finisher Steve Casebolt of Richmond, Ind., was the second-best open-competition car. ... Four cautions slowed the action. Several drivers tangled in turn one on the second lap, forcing David Breazeale and Jimmy Cliburn out. ... David Burkhalter and Brian Rickman got together for a lap-19 caution and during the yellow Mike Boland pulled his No. 222 to the infield with flames shooting out from under the hood; the fire was quickly doused. ... Rickman slowed for a lap-56 caution. ... Rodney Wing spun in turn four to draw a lap-76 caution. ... Bub McCool ran as high as third through the first half of the race, but he slapped the turn-two wall on the lap-57 restart and was never the same. ... Dane Dacus of Lakeland, Tenn., started 23rd and got up to sixth by lap 23, but he pulled out on lap 50. ... Jim McDuffie, who missed the starting field for the 100-lapper, won the feature for the combined Crate/Late Model Stock division.