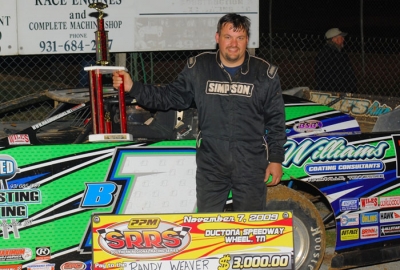 WHEEL, Tenn. (Nov. 6) — Randy Weaver is well aware of what can happen while leading in the last quarter-mile of a race at Duck River Speedway. Last season, the Crossville, Tenn., driver had a Southern Regional Racing Series victory snatched from his grasp when Dane Dacus dove through the infield and shot back onto the track and into the lead as the pair raced to the checkers. Despite a wild, spark-flying ride atop the wall, Dacus collected the win just feet ahead of Weaver. | Slideshow

Friday night, Weaver had no intentions of being denied again. After taking the lead from polesitter Anthony Burroughs, of Athens, Ala., on lap 18, Weaver guarded the low grove and led the final 22 circuits to claim his season-high fourth series victory in the SRRS Hastings-Smith Memorial. That included holding off a challenge from Terry English, of Benton, Ky., on a pair of late-race restarts.

Weaver, who admitted that last season’s lead-swapping last lap was on his mind as he took the white flag, felt like he was low enough this time to withstand a charge from English.

“I’ve had that done to me here, so I was kind of expecting it,” Weaver said. “You needed to park it on the bottom and I knew it would be tough for anyone to pass. I felt like that was the best way to get around. I just wanted to hit my marks. But I thought that I was low enough last time and someone went even lower.”

Fortunately for Weaver, English had no intentions of making such a last-lap move. The veteran racer already has enough trophies without risking tearing up a race car for one more. After giving the high side a try — to no avail — on a lap-37 restart, English ducked back to the bottom on the final restart of the night and settled for second.

“On the starts, you have to slow down so much to stay in the bottom, they could get a run on you for a lap or two. Once your tires got hot, you could get going again though,” English said. “You just had to wait for someone to slip up a little and then you could pass them.”

Once out front, Weaver, who started third, never bobbled. He did say thought that after giving the cushion a whirl at the start of the race, his pass for the lead as he and Burroughs approached lapped traffic had more to do with a bad drive by Burroughs’ than it did the backmarkers.

“I thought I could jump outside and go up there, but I dropped back to about sixth,” he said. “I maybe stayed up there too long. For some reason when we got to the traffic, they didn’t move over. It seemed like when we caught them, we all slowed down. (Burroughs) pushed up a little off (turn) two and I actually hit it just right and was able to pass him.”

Burroughs maintained second until English dove under him on lap 36. Almost simultaneously, a caution waved and Burroughs, who was trailing smoke from his left front wheel-well was stopped on the frontstretch as officials checked for a fluid leak. Officials waved Burroughs on, but sent him to the tail of the field. Noticeably upset, Burroughs chose instead to pull off the track.

That bumped English to second. English then held off a high-side charge from Todd Morrow and Brandon Kinzer to secure the spot. Kinzer eventually jumped the cushion, ending his night on the final restart, and Morrow was overtaken in the waning laps by a fast-closing Posey.

Notes: Weaver’s GRT Race Car is owned by Bob Harris and carries sponsorship from Preferred Sandblasting and Painting and Williams Coating Consultants. Harris, who has fielded rides for David Gentry and Tyler Landers, and has also had standouts Wendell Wallace and Freddy Smith make guest appearances in his cars, has won races with Weaver behind the wheel before. ... The Southern Regional Racing Series stays at Duck River for another $3,000-to-win 40-lapper Saturday evening. ... Series points leader Jay Brinkley of Raus, Tenn., took a provisional and survived the attrition-filled race to finish seventh, padding his points lead over Josh Putnam. Putnam ran as high as fifth before a spin relegated him to 17th. Only 12 cars finished. ... Timmy Orrell of Shelbyville, Tenn., won the companion Crate Late Model feature. ... Anthony Burroughs was the overall fast qualifier during group qualifying with a quick lap of 13.000 in Group 1. ... Among drivers failing to make the feature: Mike Hammerlee, Kenny Cobble, John Owenby, Lamar Scoggins, Brandon King, Mark Fields and Jimmy Tucker.

Correction: Fixes Kenny Cobble as among drivers missing feature, instead of Tony Morris.