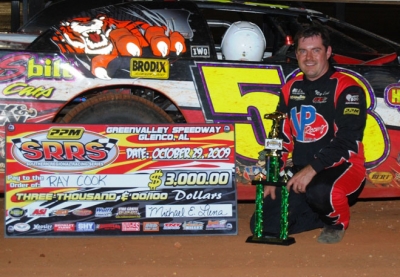 GLENCOE, Ala. (Oct. 29) — Not since Ray Cook was battling in four-bangers back at his hometown Tri-County Racetrack as he won as many races as in 2009. The 38-year-old Cook notched his career-high 10th Late Model victory of the season Thursday at Green Valley Speedway, collecting $3,000 for a flag-to-flag triumph. | Slideshow

"We had tied our most wins in a season coming into this one, so this is now the best year I've ever had in a Late Model when it comes to victories," said Cook, who had nine Late Model victories in 2000. "There ain't nobody more shocked than I am. It's unbelievable. I've won more races in a season, but it was back in the four-cylinder class and long before I even drove a Late Model."

Starting outside the front row, Cook got the jump on polesitter Todd Morrow of East Ridge, Tenn., and was in control at the first of two cautions on the 18th lap.

Sixth-starting Shane Clanton of Locust Grove, Ga., the fastest among 50 qualifiers, slipped by Tony Knowles of Tyrone, Ga., on the restart to take the second spot. Clanton put a little heat on Cook on another restart midway through the race, but Cook pulled away to win by more than a straightaway at the finish.

"I'd be lying if I said I wasn't worried when I saw that Clanton had moved into second place," Cook said. "I saw him in third on the scoreboard and then the caution came out again after we ran a lap, and he was in second. I knew he was moving, and I also knew where he'd started, so I knew he had to be runnin' pretty good."

Clanton settled for second followed by Knowles and another Georgian, 22nd-starting Clint Smith of Senoia. Josh Putnam of Killen, Ala., rounded out the top five. Jake Knowles of Tyrone, Ga., a cousin to the third-place finisher, was running third when he broke a driveshaft at the halfway mark.

Notes: Cook's Danny Dishman and Ronald Ivey-owned MasterSbilt Race Car has a Race Engine Design powerplant and sponsorship from Hicks and Ingle Co. General Contracting, A+ Moving and Storage Company and PRC. ... Shane Clanton lowered the track record in time trials with his 13.551-second lap on the 3/8-mile circuit. ... Randy Weaver's car stopped on the backstretch during parade laps and he was towed off the track. ... Clint Smith recovered from earlier problems to finish fourth in the feature. He broke a cover bearing and stripped his car's spur gears in a heat race, forcing him to transfer through a consolation race. ... Polesitter Todd Morrow broke a steering rack near the lap-15 mark but was glad to be in the mix. "The way my season's been going, it feels great to get a chance to race against these guys and run well enough to start from the pole," Morrow said. "I was starting to have doubts, but it feels good to find out you can drive a race car again. It helps your confidence." .... Anthony Burroughs started 12th but fell out early with engine problems. "We knew it was at the point where it was getting tired," he said. ... In the companion Crate Late Model feature, Ronnie Johnson slipped by Tom Maddox amid traffic on the final lap for the victory.