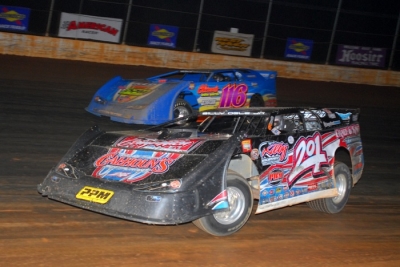 Ogle, who started sixth in the 24-car field, slipped by Ronnie Johnson of Chattanooga, Tenn., amid traffic in the late stages of the 60-lapper for a $5,000 victory in the Battle of Ringgold Fall Classic. Runner-up Randy Weaver of Crossville, Tenn., fell short in trying to deny Ogle his fourth series victory of the season while Brandon Kinzer of Allen, Ky., who led the first 22 laps, was third. Last year's TTDCS champion Rick Rogers of Knoxville and Tommy Kerr of Newport, Tenn., Ogle's closest pursuer in the points chase, rounded out the top five. | Slideshow

Johnson, who started on the pole and took the lead from his fellow front-row starter Kinzer on the 23rd lap, controlled the middle stages of the race but eventually faced challenges from Ogle. Johnson tangled with a lapped car with Ogle hot on his heels, handing the lead to Ogle as Johnson ducked to the infield for a tire change. He rallied back to finish eighth.