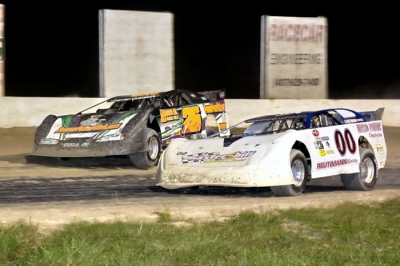 On a restart with just four laps remaining, the 18-year-old Wood used high side of the speedway to charge from fourth to first, overtaking Lloyd on the final lap for a $3,000 United Dirt Late Model Challenge Series victory.

“I thought I’d be finishing fourth,” Wood said after his dramatic victory. “I was running (the high side) all night and just kept getting stuck behind lapped traffic.”

Wood controlled the first third of the race before relinquishing the lead to Lloyd. Shortly thereafter, basement dwellers Johnny Collins and Keith Nosbisch were able to use the backmarkers to their advantage and sneak by the rim-riding Wood and drop him to fourth.

“It was a traffic jam out there,” Wood said. “It was tough.”

In front of Wood, fans watched as Lloyd taught a seminar on how to maneuver through the back of the field. Collins and Nosbisch stayed right on Lloyd while at times, the top three — and a handful of lapped cars — could have all been covered with a blanket as Collins repeatedly tried to sneak under Lloyd.

On lap 37, Nosbisch powered past Collins and applied heavy pressure to Lloyd until a caution waved with just four laps remaining.

“I knew someone was gonna try that high groove,” Lloyd said. “I just figured it would be (Nosbisch).”

Instead, when the green flag waved with just four laps to go, Nosbisch looked low in one and two and slipped ever so slightly. For just a split second, it appeared as if Lloyd was going net a popular hometown win in his David Clegg-owned entry. But, much like Nosbisch, Lloyd’s tires were fading too fast.

“I just went too soft on tires,” Lloyd said. “I had no choice but to stay on the bottom.”

On lap 47, a high-flying Wood worked by Collins to take over third. One lap later, he roared around Nosbisch to grab second. And, when the white flag waved, Wood had pulled even with Lloyd to battle for the victory.

The duo raced side-by-side through turns one and two and down the backstretch with Wood driving into turn three deeper than Lloyd. Lloyd tried to battle back on the bottom in turns three and four, but Wood’s momentum carried him to into the lead as he passed three cars in the final four laps for his first UDLMCS victory.

“I wasn’t just going to give it to them,” Wood said about the lap-46 restart. “I wasn’t going down without a fight.”

“He did what he was supposed to do,” Lloyd said. “He went up there and tried it and it worked.”

Notes: Wood’s Rocket Chassis is powered by a Koury racing Engine and carries sponsorship from PowerPokerClub.com, Bearden Oil Racing Fuels, Sanford Auto Dealers Exchange, and Big A’s Custom Graphics. ... The start of the UDLMCS feature was delay nearly an hour after a car in the track's thunderstock division demolished a section of the outside concrete retaining wall on the frontstretch. ... The second round of the Florida State Late Model Championship is a $5,000-to-win UDLMCS event on Saturday at Volusia Speedway Park in Barberville, Fla.