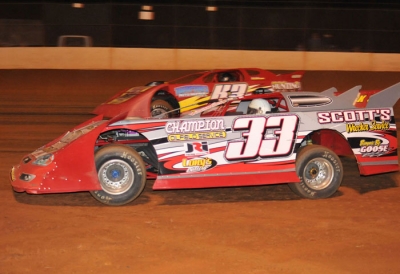 MERIDIAN, Miss. (Oct. 10) — When 15th-starting Scott Dedwylder started the 50-lap feature at Whynot Motorsports Park, he knew wasn't going to make up much ground in the Mississippi State Championship Challenge feature. So the Vossburg, Miss., driver headed to the pits during an early yellow flag for different rubber. | Slideshow

"I went to the pits during that caution to change to a harder tire," Dedwylder said. "I wasn't able to get by anyone and knew the track was good, so it turned out to be a good decision."

Dedwylder's good decision paid off in a big way in the season's MSCC finale. Rallying after his pit stop, Dedwylder got up to second in the race's late stages, then overtook hometown driver Chad Thrash on the final lap for his first MSCC victory since 2005. Dedwylder pulled alongside Thrash on the backstretch and made an inside move exiting turn four to win the race to the checkered flag at the quarter-mile oval.

Thrash, who took the lead from polesitter Scott Slay of Clinton, Miss., on the 23rd lap, was denied his fourth victory of the season while finishing second. Fast qualifier Anthony Burroughs of Muscle Shoals, Ala., was third and Dane Dacus of Arlington, Tenn., was fourth. Slay was fifth, good enough to wrap up his third series championship and first since 2004.