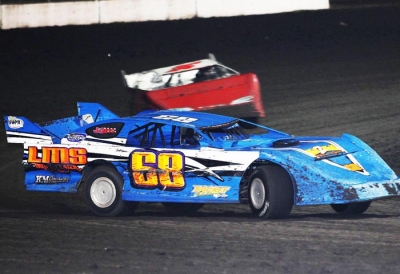 Rob Litton gets up to speed at Houston. (ronskinnerphotos.com)

BAYTOWN, Texas (Oct. 10) — Rob Litton of Alexandria, La., rallied from his 10th starting spot at Houston Raceway Park to score his third victory of the season on the O'Reilly Southern United Professional Racing tour. Litton earned $2,500 for a victory in a caution-plagued event, his second series win of the year in Texas. | Slideshow

Kyle Cummings of Sibley, La., came from his 19th starting spot to finish second with 11th-starting Michael Coleman of Tyler, Texas, in third as the top home-state finisher. Chris Brown of Spring, Texas, and early leader Ronny Adams of Greenwood, La., rounded out the top five as the last driver on the lead lap. Only nine of 25 starters were running at the conclusion of the 50-lapper.

O'Reilly SUPR points leader Kenny Merchant of West Monroe, La., was the first driver out of the race after starting third. A broken rocker arm in his engine forced him to take a single lap and pull to the pits.

Front-row starters Kevin Sitton of Baytown and Jody Prince of Sibley, La., battled up front briefly, but Prince retired with a flat tire after contact with Sitton, and Sitton also headed pitside with a flat before the race restarted.

That handed the lead to Adams, who was in control until Litton went by on the 20th lap for a lead he'd never give up. Cummings advanced 17 positions but never seriously challenged Litton in a race with numerous restarts. More than a dozen caution flags slowed the 70-minute race, mostly for debris on the hooked-up racing surface.

Notes: Litton's Rocket Chassis has a Wall 2 Wall Racing Engine and sponsorship from LMS Truck Center, TWM, Johnson Enterprises and KM Construction. ... Litton's 18th career SUPR victories ties him with Ricky Ingalls of Longview, Texas, at seventh on the all-time series list. ... Litton's previous victories in 2009 came in the season opener at Texas Motor Speedway in Fort Worth and at I-30 Speedway in Little Rock, Ark. ... Modified ace Jason Hughes, who has made infrequent starts with Flynn Racing, finished seventh with the team in a No. 12 Late Model with a decal scheme similar to the modified Hughes pilots. ... Early leader Ronny Adams ran out of methanol with four laps remaining and needed to refuel before finishing. ... Next up for O'Reilly SUPR competitors is the Floyd Clausen Memorial Louisiana State Championship on Oct. 16-17 at Baton Rouge Raceway in Baker, La. The 50-lap main event pays $2,500 to the winner. ... SUPR wraps up the season with the $5,000-to-win Jambalaya 100 on Nov. 13-14 at Pike County Speedway in Magnolia, Miss.