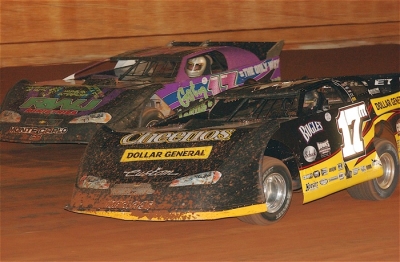 CLEVELAND, Tenn. (Oct. 8) — In a showdown of long-time Cleveland Speedway standouts, Dale McDowell of Rossville, Ga., overtook Skip Arp of Georgetown, Tenn., on the 14th lap and led the rest of the way for a 53-lap victory in the sixth annual Tar Heel 50. The fourth-starting McDowell earned $5,000 in the unsanctioned event promoted by North Carolina driver Ray Cook.

"It's good for us to win near home," said McDowell, who was in command during a stretch of green-flag racing between laps 15-41. "We've run strong here the past couple times we've been here, but we just haven't been able to win one. Everyone near the front had different tire combinations, and it felt good to win because I've gotten beat here a couple times on tires. We were set up for shorter runs because these tight-cornered tracks usually have more cautions, so I had to be careful on the longer run with the lapped cars. That was a big part of it."

Arp, who started outside the front row, settled for second at third-mile oval northeast of Chattanooga while former race winner Shane Clanton of Locust Grove, Ga., advanced two positions to finish third while Rick Rogers of Knoxville, Tenn., and Clint Smith of Senoia, Ga., rounded out the top five. William Thomas of Phenix City, Ala., was the fastest of 28 qualifiers and started on the pole, but he was the race's first retiree when he clipped the left-rear of Jamie Perry's slowing machine on the sixth lap.

"We went a little softer on tires, and I knew when I went out there and saw the racetrack that we shouldn't have done that," Arp said. "I thought the track would stay wetter, but it didn't. It's a brand new car and tonight's the first night we've run it, and I guess we've still got some more work to do. We were pretty fortunate to run where we did."