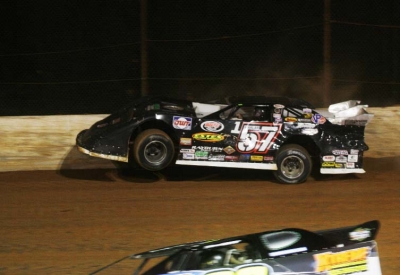 Bland, the young Campbellsville, Ky., driver who earned $2,500 for a Friday night Fall Classic victory, settled for second Saturday with Dustin Linville of Bryantsville, Ky., in third. Polesitter Eric Wells of Hazard, Ky., and Dustin Neat of Dunnville, Ky., rounded out the top five in Ponderosa's richest events of the season.

Wells and Don O'Neal started on the front row with O'Neal taking command early and Bland moving quickly up to second. Bland overtook O'Neal on the eighth lap, but the frontrunners ran into trouble on the 13th circuit when Steve Stollings spun in turn four, triggering a multicar accident that collected Bland and O'Neal.

While O'Neal was knocked out of the race along with Skylar Marlar and Tim Rivers, Bland was able to continue and officials restored him to the lead with Neat and Wells giving chase. Mike Marlar had already advanced 11 positions and held the fifth spot by lap 15.

The race's final caution appeared for a spinning Rick Rogers on the 19th lap, and Marlar picked up two spots on the restart and began working on Neat as Bland built nearly a straightaway lead by lap 30.

Marlar took second from Neat on lap 31 and began reeling in Bland amid traffic. The pair ran side-by-side on lap 38 with Marlar making the winning pass on lap 40.