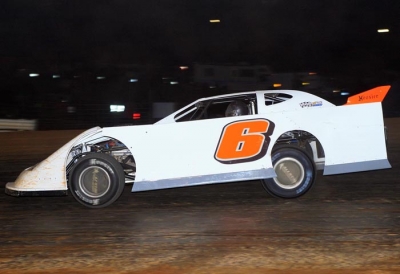 NATURAL BRIDGE, Va. (Oct. 3) — Regaining the lead when Bo Feathers tangled with a lapped car in the final laps, Jamie Lathroum of Mechanicsville, Md., continued his career-best season with a $7,500 victory in Saturday's Sunoco Fall Classic at Natural Bridge Speedway.

Runner-up Booper Bare finished 1.3 seconds behind Lathroum, who led the final six laps of the unsanctioned event. Austin Dillon of Welcome, N.C., was third with D.J. Myers of Greencastle, Pa., and Walker Arthur of Forest, Va., rounding out the top five. Feathers, of Winchester, Va., ended up 11th in the 50-lap feature. | Slideshow

At the outset, Lathroum got the jump on polesitter and fellow front-row starter Jim Bernheisel, who spun out of contention in turn two on the second lap. Lathroum led through the early stages as former race winners Feathers and Bare gave chase while the frontrunners maneuvered through lapped traffic.

A lap-19 caution, one of nine in the race, gave Lathroum clear racetrack before the halfway point and he pulled away. But with Feathers gaining ground amid traffic, the second-running driver used slower cars to work past Lathroum and take command entering turn one on the 32nd lap.

Feathers was in control in the race's late stage when he tried to put consolation race winner Matt Quade of Mechanicsville, Md., a lap down. Feathers tried to duck under Quade entering turn three, but contact sent Feathers spinning and drew a caution, putting Lathroum back out front.

One more yellow for Tim Senic's lap-47 spin gave Bare one last shot at Lathroum, but Lathroum held on for his fourth victory of the season paying at least $5,000.