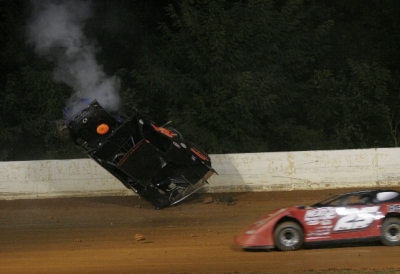 Shon Flanary of Mount Carmel, Tenn., finished second at the 3/8-mile oval while Dustin Neat of Dunnville, Ky., was third. Bobby Wolter Jr. of Lexington, Ky., and Rick Rogers of Knoxville, Tenn., rounded out the top five. Mike Marlar of Winfield, Tenn., ran up front through the first half of the race but was forced to pit with a flat tire after challenging Bland for the lead.

The most serious race stoppage came on the 23rd lap when officials red-flagged the race and eventually called it official. Jimmy Crabtree of Ravenna, Ky., was running fourth when he flipped his car exiting turn two. He wasn't injured but the car was heavily damaged.