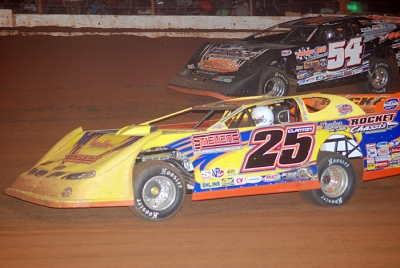 COLUMBUS, Miss. (Sept. 27) — With October just around the corner and a single win to his credit the entire 2009 season, Shane Clanton needed some refuge. And for the Locust Grove, Ga., driver, there's no better track than Columbus Speedway.

"I love this place. The first time I ever came here I won," Clanton said. "It just fits my driving style the way the banking is, the way the dirt it is, it doesn't matter. It seems like every time I come over here I run top five. It just fits me." | Thrash boosts stock | Postrace notebook | Race history | Slideshow | Magnolia State 100 prelims

The 34-year-old Clanton's annual return to Columbus paid off big Sunday evening as he led the final 65 laps of the 20th annual Magnolia State 100 for a $20,009 payday, fighting off a late challenge from seven-time race winner Billy Moyer for his second victory of the season.

A thrilled Clanton briefly climbed on the windowsill of his yellow No. 25 to celebrate in victory lane as race promoter Dewitt Singleton ironically poured a bottle of water down the winner's back on a weekend when rain plagued the event, forcing a day's postponement.

"I forgot what it was like," crew member Jonathan Owensby said later of the victory lane celebration after the team broke through for the first time since another $20,000 payday in April at Farmer City, Ill. The team had been seeing the light at the end of the tunnel.

"We've had a good car some places this year, but the past month we've really picked the pace up and started qualifying better, top-fives, top-10s, and been running top-five," Clanton said. "At (Sept. 12's) World (100) we broke a motor and had to change motors at the last minute, and we were off our game a little bit. We got our good motor back and we showed it tonight and won the race."

The victory came in Mississippi's richest race where Clanton has dominated the last three years. He led the final 17 laps in 2007 en route to victory, then led 86 laps of last year's race before a flat tire knocked him out with six laps remaining. This year, he stalked outside front-row David Breazeale of Four Corners, Miss., through the early stages before slipping by, making him the Magnolia State 100 lap leader for 168 of the last 217 laps at the third-mile oval near the Mississippi-Alabama border.

"We're glad to come back to a place, familiar ground," Clanton said. "When you run good at a place a lot, you feel good coming back over here. We were optimistic that we've had a good car the past month, but we had to get a win under our belt."

Moyer started ninth and slowly crept into contention in the race's late stages before settling for second while surprising 29-year-old Chad Thrash of Meridian, Miss., rallied from 21st to third in completing 100 laps for the first time.

Clanton's runningmate Clint Smith of Senoia, Ga., advanced four spots to finish fourth and Breazeale, still looking for his first Magnolia State 100 victory faded to finish fifth ahead of up-and-down polesitter Ronny Lee Hollingsworth of Northport, Ala., who dropped out of the top 10 before rallying late.

"Any Georgia guy is good," Smith said of his fellow Peach State driver. "Me and Shane are good buddies. He's had a tough year, and I have, too, and I'm glad to see him get another win. I think he's got two of them and both are worth $20,000, so he did a good job."

At the outset of the race, Breazeale got the jump on Hollingsworth and quickly caught the tail of the field and lapped traffic while the sixth-starting Clanton took second from Hollingsworth on the ninth lap. A lap-15 caution bunched the field and for 20 laps Clanton stayed right with the high-running Breazeale, looking for a line to get by the black No. 54.

"I knew I was better than him through (turns) one and two just using the cushion exiting the corner, but he was there and I couldn't drive by him," said Clanton, who eventually began diving low in the corners. "So I was trying to turn under him off turn two, and I never could clear him. But finally I could clear him off turn four and I could get back to my line and get back to turn one where I needed to be, and I knew I'd be a lot better."

When Clanton made the winning pass, he quickly pulled away to a comfortable lead before a lap-42 caution for top-five running Chris Wall of Holden, La., last year's Magnolia winner who pitted to repair a broken spoiler that would suffer more damage later in the race.

Moyer got past Breazeale on the restart, but Clanton ran unchallenged through the race's middle stages and held a half-straightaway margin after 70 laps with Thrash another half-straightaway behind Moyer with just half the 26-car field still in action.

But with 15 laps remaining, Moyer began creeping closer as his lower groove appeared to pick up steam and Clanton struggled for a few laps trying to put a lap on Bill Frye.

A lap-91 caution appeared for a spinning Wall, and then another yellow four laps later when Wall's spoiler fell off altogether and came to rest on the turn-two banking gave Clanton a final scare.

"It kind of bit us last year and I thought we had it. This year, I'm leading it and the caution comes out with 10 to go, and I thought, 'Oh no, here it goes again,' " Clanton said. "We had a good car tonight and everything finally fell into place where we could win."

Moyer felt like his left-rear tire wasn't working as well as he needed but hoped he could sneak past Clanton on one of the final restarts.

"I kept running in on them restarts, I could get beside him right in the middle of the corner in (turns) one and two where if he would've bobbled a bit I could've had a shot on getting by him maybe, but he never made any mistakes. He ran a good race," Moyer said. "We've been in a hole here lately, so we feel at least that we can see the winner at the end of the race there, we feel real good about that."

Thrash, running second on the Mississippi State Championship Challenge, was thrilled to be in touch with the leaders at the race's end, but couldn't quite keep up with the top two.

Notes: Clanton's Rocket Chassis has a Custom Race Engine and sponsorship from Stevens Plumbing and Mechanical and Allstar Performance. ... Clanton phoned car owner Ronnie Dobbins after the race with the good news. "He's tickled to death," Clanton said. ... Friday's preliminaries ran off without a hitch, but rain that dumped more than 2 inches of water on the track Saturday caused problems. Officials were able to get the racing surface mostly in shape by Saturday afternoon, but water seeped under the frontstretch wall in several places, forcing a postponement until Sunday. ... Thirteen of 26 starters were running at the checkered flag, nine on the lead lap. ... Nine cautions slowed the action, none for serious incidents. ... The biggest scramble came on the 15th lap for a turn-two skirmish that included Randy Weaver, Tony Knowles, Rick Rickman and Tommy Kerr. ... Otherwise, the yellows were for single-car problems or debris. ... Sunday's action began with three consolation races won by James Ward, Josh Putnam and Chad Thrash. Billy Moyer Jr. was running in the second transfer spot behind Putnam in the second consolation when a broken suspension piece sent him spinning in turn one on the final lap. ... Kerr won the last-chance race.