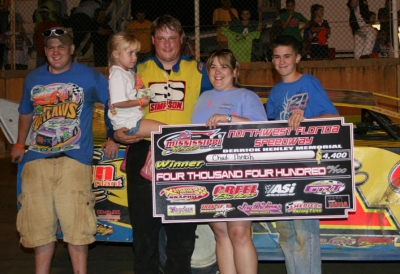 After starting from the second position, Thrash traded the lead four times with polesitter Shep Lucas of McKenzie, Ala., before passing Lucas for good on lap 15. Negotiating heavy lapped traffic and rough track conditions, Thrash dominated the remainder of the 44-lap race to take home the $4,400 winner’s check.

“This is a fun little track,” said Thrash of the speedway. “This is definitely one of our biggest wins so far and to have won both races here this year makes it even better.”

Thrash first passed Lucas on lap two, but a quick caution gave the lead back to Lucas. The two battled back and forth the next few laps, neither able to pull away from the other. But when Lucas pushed high on lap 15, Thrash was able to drive by and begin to build a comfortable lead.

“I was running so hard at first I kept hitting the holes and messing up and giving the lead back to (Lucas),” Thrash explained. “I finally just decided to stay in the bottom and ride. Luckily he messed up again and I was able to get back by him.

“The track was a little rough tonight, but that’s something you just have to deal with. After the weather they’ve had here all week, for us to even get this race in is amazing.”

Thrash’s only obstacle from that point was lapped traffic. He had a couple of close calls while trying to pass the slower cars that were racing for position ahead of him. At one point, Thrash turned completely sideways after getting into the back of a slower car.

But Thrash was able to recover and went on to lap all the way up to the fourth position.

A caution with three laps remaining gave Lucas a final shot at Thrash. But Thrash once again pulled away while Lucas was forced to hold off a challenge from Steve Bryan of Collinsville, Miss. Bryan looked under Lucas on the final lap, but couldn’t complete the pass.

“I found a good grove early in the race that seemed to help a little bit, but I finally just had to slow down and hold on to second,” said Lucas, who also finished second to Thrash in the race in June. “Last time it was my fault that I didn’t win, but tonight he was just faster.”

Thrash came into Saturday night’s race 40 points behind Slay and with his win, keeps his hopes of winning his first series championship alive.

“This win is really big for us in the championship deal,” Thrash said. “We gained some ground and definitely picked up some momentum, so we’ll go into the next two races and just see what happens.”