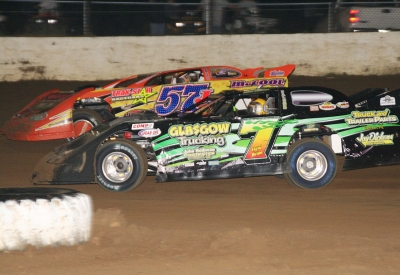 McCool, of Vicksburg, Miss., was in control most of the race with the third-starting Rickman pressuring him after the final caution on the 40th lap. When McCool faltered in turn four with five laps remaining, Rickman slipped past and went on to crossed the finish line one second ahead of McCool. | Slideshow

The jubilant winner emerged from his race car as steam billowed out of it from the overheating machine. "This is, this is it, the biggest one of my career," Rickman said of his victory as crew members and family joined him on the frontstretch.

Louisiana drivers James Ward of Lettsworth and Kyle Cummings of Sibley were third and fourth with Brad Banes of Learned, Miss., rounding out the top five.

At the outset, McCool started on the front row and set the early pace, encountering lapped traffic after just five laps at the quarter-mile track. Rickman wrestled the second spot from polesitter Chris McElhenney on the sixth lap, but McElhenney regained the position.

On lap 23, the second-running McElhenney got tangled up with the lapped car of Michael Aycock in turn two, but officials restored him to the second spot, although his car suffered sheet-metal damage to the right side. Banes was also caught up in the wreck.

The leader McCool had his own brush with lapped traffic in turn one on the 31st lap, allowing McElhenney to step up a challenge for the lead. McElhenney dipped inside McCool on lap 33, but McCool held him off before the next yellow appeared for debris.

McCool had clear racetrack while three-wide racing developed behind him with Rickman, McElhenney and Ward battling for the second spot. Rickman took the position and closed on McCool by lap 39.

The fifth-running McElhenney tagged the backstretch wall a lap later to draw the final caution, knocking him out and leaving 10 cars on the track with 10 laps remaining.

Rickman began nosing inside McCool and the frontrunners were virtually side-by-side for four laps until McCool's slip let Rickman take control on lap 45. Rickman edged away while McCool had his hands full holding onto the second spot the rest of the way.

Notes: Brian Rickman's Mastersbilt Race Cars is powered by a Jay Dickens engine and sponsored by John Holliman Construction, Brinkley Farms, Glasgow Trucking, Truck and Trailer Parts. ... Rickman, the son of long-time Mississippi racer Eddie Rickman, is a regular competitor at Columbus and Magnolia Motor Speedways in his hometown. ... The feature had six yellow flags: three for spun cars, one for debris, one for McElhenney's single-car wall contact and other being the multi-car accident involving four drivers. ... The race was rescheduled after a Sept. 12 rainout. ... The 36-minute feature race was completed at 12:15 am. ... Lucky Keeton topped Eric Cooley to win the night's Crate Late Model feature.