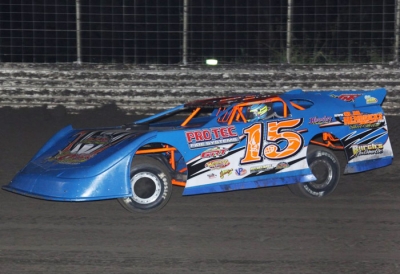 Dacus faced his most serious challenge from polesitter Jamie Elam of Senatobia, Miss., who stayed with the leading Dacus most of the way. Elam turned up the heat amid traffic on the 25th lap and pulled even with Dacus a lap later. But during the side-by-side battle, Elam looped his mount in turn one, knocking him out of contention.

MSRA points leader Billy Moyer Jr. of Batesville, Ark., the last-lap series winner in April at West Memphis, moved into second but fell three lengths behind on the white-flag lap. But when Dacus jumped the turn-four cushion, Moyer pulled even heading for the checkered flag. But Dacus won the drag race to complete the victory, denying Moyer another last-lap win.

The night's race was marked by a serious heat race accident when the throttle hung on the car driven by Mike Carr of Lake Cormorant, Miss. He slammed the turn-two wall and was taken to a nearby hospital. He was later released with no serious injuries.