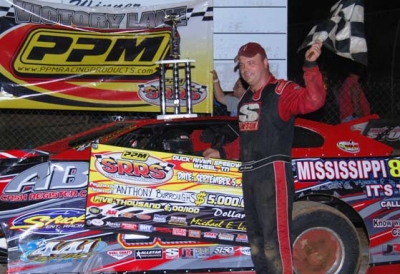 Posey, of Petersburg, Tenn., forfeited what would have been his richest career payday when he left the track to go across the scales before returning to the infield for a routine inspection. Instead, it was Burroughs who claimed the $5,000 victory. And it was Burroughs — who started on the front row and led early before Posey slipped by for the lead — who also posted his biggest career win.

Notes: Burroughs’ BHL Motorsports-owned team is sponsored Mississippi One Call, ABC Cash Register Company, Greene’s Vinyl Products and 444 Race Wraps. The team utilizes MasterSbilt By Stuckey race cars and Wall-2-Wall Performance Engines. … Posey’s disqualification did not set an SRRS precedent. In fact, SRRS officials have penalized drivers twice before for not reporting directly to the infield at the conclusion of a main event. Last season, former series champion Byron Michael was stripped of a victory at Moulton (Ala.) Speedway and Randy Weaver had a runner-up finish erased at Duck River Speedway. Both of those tracks have their weighing station on the outside of the speedway and, like Posey, both Michael and Weaver left the track to go across the scales first. … The four fast qualifiers among 44 drivers during group qualifying were Steven Ashby, Burroughs, Posey and Weaver. Ashby was the first driver to retire from the main event. … Ronnie Johnson, Brinkley, Jake Knowles and Chris Ragan were heat race winners. … 2009 Duck River Speedway track champion Jeff Walker finished 19th. … Group three was one of the stoutest groups with seven drivers from that group making the show, including Wendell Wallace, former track champ Daniel Miller, series points leader Jay Brinkley, 2009 track champ Jeff Walker and local standout Tommy Lawwell, who finished ninth after starting 22nd. … Among drivers not making the feature lineup were David Brannon, Kelly Hanvey, Mark Mears, Neal Baggett, Shannon Davis, Robert Stutts, Jerry Owens and Brian Rickman. … Brinkley leads the SRRS points standings by 285 over Josh Putnam. Burroughs is third, 540 behind Brinkley. … David Gentry won the companion Crate Late Model feature.