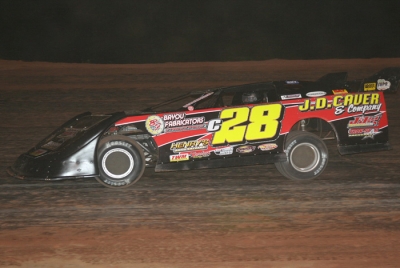 Merchant, who won the previous two nights at Greenville (Miss.) Speedway, rolled to a six-second victory over Jon Mitchell of Nash, Texas, for his series-leading 52nd career victory. He took the lead from Rob Litton of Alexandria, La., on the fourth lap and never looked back, collecting $2,500 for the 40-lap triumph. Kyle Cummings of nearby Sibley, La., rallied from his 17th starting spot to finish third followed by Texans Kevin Sitton of Baytown, who started on the fifth row, and 16th-starting Chris Holley of Dayton, who recovered from a lap-22 spin and a lap-24 pit stop to change a flat.

Polesitter Mark Andrews of Marion, La., faded to finish seventh. Litton dropped out of the second spot when his car's rear end broke; he was listed 14th in the rundown.

Merchant, whose series-leading eight victories have come in the last 14 events, is on one of the hottest streaks of his SUPR career. Since beginning his Late Model career in 1994, Merchant has 52 victories in 461 SUPR events, 11 percent of the series races over 15 years.

Notes: Merchant's Trak-Star chassis is powered by a Wall 2 Wall Performance Engine and has sponsorship by J.D. Caver & Company, Bayou Fabricators, Henry's Auto Salvage and J&J Motorsports. ... Merchant has six back-to-back victories in his SUPR career, but this marks his first three-in-a-row streak. ... Eight drivers finished on the lead lap of a 42-minute race that ended at 11 minutes after midnight. ... Nicholas Brown spun in turn two on the first lap of the feature. ... Gary Christian's race ended early when his engine expired. ... Drivers failing to make the feature: William Keeney, Charles Thurmon, Jeff Gandy, John Ewell, Donald Watson, Wendall Bolden, Eddie Provence and Robbie Stuart of Deridder, La. ... Stuart had a tough-luck weekend. He broke an engine the previous night at Greenville and after swapping engines, the team arrived late at Champion Park, barely in time to get on the track for the consolation race. In line for a series provisional, Stuart instead got caught up in a wreck with William Keeney, sending Stuart's car into the frontstretch wall at the flagstand, causing heavy damage to his No. 6R. ... Four SUPR races remain in 2009 beginning with the Floyd Clausen Memorial Louisiana State Championship on Sept. 12 at Baton Rouge Raceway in Baker, La.