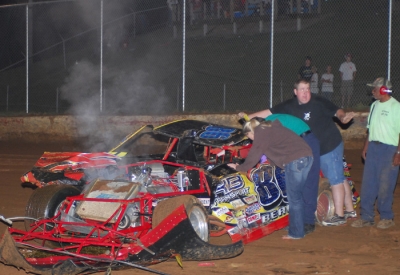 Wallace crossed the finish line ahead of Anthony Burroughs of Muscle Shoals, Ala., while Ronnie Johnson of Chattanooga, Tenn., James Ward of Lettsworth, La., and Chris Ragan of Ramer, Tenn., who wrapped up the title on the two-track miniseries at North Alabama and Moulton Speedway.

Beard's accident came in a consolation race as he battled out of turn four when Daniel Miller and Mark Dodson got together, pushing up the track. Beard was going by on the high side when his car launched off Dodson's machine at full speed, flying 20 feet off the track and slamming nose-first into the surface before barrel-rolling.

Beard was slumped over the steering wheel immediately after the accident, but became responsive a few moments later and went back to his pit area before heading to the hospital. His father Gary reported later in the night that CT scans showed a mild concussion.