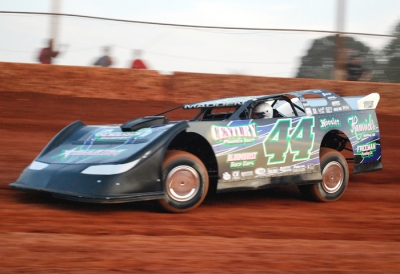 Chris Madden tunes up before his $10,000 victory. (Kyle Armstrong)

GAFFNEY, S.C. (Sept. 6) – On a Sunday night when Cherokee Speedway inducted its Class of 2009 into its Hall of Fame, future Hall of Famer Chris Madden celebrated in his own way by winning the O’Reilly Southern All Star East Series Hall of Fame Race and the $10,000 check that went with it. | Slideshow

Madden, of Gray Court, S.C., started the 75-lap race from the inside of the second row and trailed Chris Ferguson of Mount Holly, N.C., for 69 laps. Madden took the lead after going three-wide with Ferguson and reigning series champ Casey Roberts of Toccoa, Ga., following a restart and cruised the rest of the way in claiming his fourth major win of the season at Cherokee Speedway.

“This is a big win for us. It really means a lot to come out here and win in front of this crowd,” said Madden, who also won a Lucas Oil Late Model Dirt Series race at Cherokee in June. “This one goes right up near the top of the list of all of our wins this year for sure.”

Ferguson took the lead on the start of the race from his outside-front-row starting position over the polesitting Roberts. As Ferguson stretched his lead, Madden challenged for second and cleared Roberts for the position on the eighth lap

Ferguson dominated the first half of the race, opening up a lead of more than 10 lengths on a number of occasions. But his lead was erased each time by numerous cautions that plagued the early stages of the race.

After the race reached the halfway point, Madden stayed within striking distance of Ferguson and closed to his bumper a number of times in lapped traffic.

Passing Ferguson wasn’t an easy task for Madden. In fact, he actually had to pass him twice for it to count. After trailing Ferguson by just a few lengths through two extended green-flag runs, Madden made his move while he and Ferguson navigated heavy traffic on lap 68. While Ferguson was caught behind a slower car, Madden slipped by on the inside. However, the caution came out before the lap was completed, giving the lead back to Ferguson.

Madden didn’t wait very long to make the pass again. With a good run on the restart, he ducked inside of Ferguson going into turn one. He completed the pass through the center of the corner, but slid high exiting turn 2. Ferguson was able to pull back along side using the middle grove while Roberts entered the battle on the low side.

The three drivers raced side-by-side-side into turn 3, with Madden pulling ahead off of turn 4 as Roberts cleared Ferguson for second. Once out front, Madden easily pulled away from the field before the race’s final caution set up a four-lap run to the finish.

Roberts took a look under Madden on the restart, but Madden held off the charge and pulled away to the victory.

Roberts didn’t think he had a car capable of challenging for the win, but he was in the right place at the right time to grab second away from Ferguson and for a moment, thought he might end up with the lead.

“I knew if I followed them I wouldn’t have a chance,” said Roberts. “I thought they might get together, so I kind of dove to the inside there and hoped I could get by them. It almost worked out, but just not quite.”

The second-place finish pads Roberts’ lead in the series championship standings. With more than 150 points separating him and second-place Monk Gulledge and just two races remaining on the season, the 2007 and 2008 series champion is well on his way to winning his third consecutive title.

The race marks another strong run for the Ferguson. The 19-year-old driver had a solid Labor Day weekend as he also scored top-five finishes in a pair of Carolina Clash Super Late Model Series events on Friday and Saturday.

“The lapped traffic was tough tonight,” Ferguson said. “It made me use up my tires more than I wanted to. I knew Madden was getting close, but I figured if I held my line I could maybe keep him behind me.”

“Those guys (Madden and Roberts) are great drivers. To lead that many laps and be right there with them is pretty awesome. It still hurts to come up short like that, but that’s just part of it.”

Benji Cole of Canon, Ga., finished fourth, while Jeff Cooke of Spartanburg, S.C., recovered from a flat tire early in the race to finish fifth.