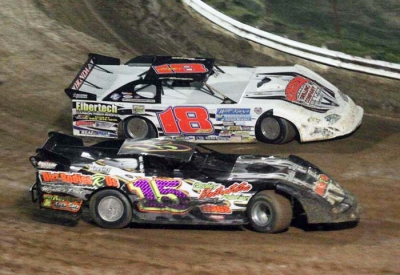 Brandon Kinzer (18) works the inside groove at 201 Speedway. (Derrick Strader)

SITKA, Ky. (Sept. 5) — Grabbing his first-ever series victory, Brandon Kinzer of Allen, Ky., won at nearby 201 Speedway for a $5,000 victory on the O'Reilly Battle of the Bluegrass DirtCar Series. Kinzer took the lead from Dustin Linville of Bryantsville, Ky., on the 13th lap and led the rest of the 50-lapper at the quarter-mile oval in eastern Kentucky.

Series points leader Victor Lee of Stanford, Ky., finished second with Justin Rattliff of Campbellsville, Ky. in third. Linville, who took the lead from Shon Flanary of Mount Carmel, Tenn., on the second lap and led 11 circuits, was fourth and former series champion Aaron Hatton of Mount Sterling, Ky., rounded out the top five. Flanary, who led the first lap, ended up eighth.

The event, the second of a tripleheader holiday weekend on series, the was slowed by nine caution flags and a lap-10 red flag when David Webb's machine was rear-ended by Terry Hicks.